8-inch tablets have been the only really new format in the tablet computer world this year, both for Android and Windows tablets, but we’ll limit ourselves to looking at the Top Five 8-Inch Android Tablets today.

The form factor can be traced back to the launch of the iPad mini last year, which at 7.9 inches is viewed as being an 8-inch tablet. The first Android tablet of this dimension was the Acer A1, which was released in June this year. Since then we have seen several other tablet manufactures follow suit, with one tablet not even releasing before next week.

(Note that prices are approximate, and subject to small changes from day to day.)

The reason behind the choice of these tablets can be found in quick introduction to each tablet below, with links to more information, pictures, and videos for each tablet.
What they all have in common is that they are all Android 4.2 tablets with a wide range of sensors and ports, including the one thing you can’t get on an iPad mini – a microSD card slot.

Acer Iconia A1 has been a good choice ever since it was first launched, as a budget 8-inch tablet with Android. Customer satisfaction is pretty high, but it is starting to show it’s age now.

It’s got the lowest resolution of them all, and also the lowest performing battery of these tablets. At 410 grams, it’s even the heaviest.

Dell Venue 8 is the (will be) newest of the lot, but also the only one with a dual-core processor. It has a slightly better resolution than the Acer Iconia A1, twice the RAM, and better battery, all for the same price.

But, it’s processing power may hold it back in some games, compared to the Acer. Then again it’s much lighter, at only 292 grams. 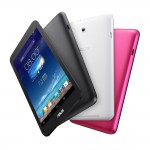 Asus MeMO Pad 8 is released today, and have a great deal going for it. Though the resolution is the same as the Dell tablet, the sharpness and color accuracy is much better.

It also has a quad-core processor, but then again has only half the RAM of the Dell tablet. So if that will hold you back depends on your tasks with this tablet. It weigh 350 grams.

Samsung Galaxy Note 8.0 is the tablet that have crowned the 8-inch Android tablet category since it was first launched.

This tablet is a shrinked down version of the 10.1-inch model, with a comprehensive range of apps that enable a lot of productivity, which includes multitasking abilities and special features accompanying the integrated S Pen stylus.

It has the same 1280×800 resolution as two of its rivals, but the display is as good as that of Asus. But, given the price, a few people would like to see higher resolution on this. But the money goes into the long list of apps and features of this tablet. So this is more than just a tablet for gaming and surfing the web. This is a tablet mean to be used for sketching, taking notes, making tables and organizing lots of information on the fly. It weighs 340 grams.

LG G Pad 8.3 is a crossover of the Samsung Galaxy Note 8.0 and the Nexus 7 FHD. It has the highest resolution of them all, a crispy clear screen, a powerful Qualcomm Snapdragon 600 1.7GHz quad-core processor, and an extensive range of apps and features. It still only weighs 338 grams.

But all of this comes at a price, so people have to pay for all of these goodies. But this is the price for those wanting a Full HD 8-inch Android tablet today. LG really want us to think of this as a productivity tablet too, just like Samsung have done with their 8-inch Note. So the apps list is really quite phenomenal.

Those are the 5 best 8-inch tablets that have been selected based on their combination of price, performance, and features, which then indicates its value for money.

If this seems unsatisfying, there are two more tablets in the category to think about. Which is the somewhat overpriced Samsung Galaxy Tab 3 8.0, and the unorthodox and somewhat out of character Lenovo Yoga Tablet 8.