The Sony Xperia Z2 Tablet will be released in the US on May 4, which is a little later than the European release, but here it comes at last.

UPDATE: Sony Xperia Z2 Tablet has since been updated to Android 6.0

We have already covered the European release, but since imported models started to appear (overpriced) on Amazon’s marketplace, a lot of people got confused about whether the Sony Xperia Z2 Tablet had actually been officially released in North America or not.

It had not, as Sony sent out a media alert on Tuesday that notified us about the official release details.
The official US released is May 4 which includes Sony Stores as well as large retailers. And while it is possible to pre-order it from Sony, it still won’t start to ship from their warehouse before May 3, which means that for a lot of people it might not arrive any earlier than if it was bought elsewhere.

So for those who are waiting for the properly priced regular Sony Xperia Z2 Tablets to arrive, it’s just a matter of days before it gets its price in order on Amazon: http://www.amazon.com/Sony-Xperia-10-1-Tablet 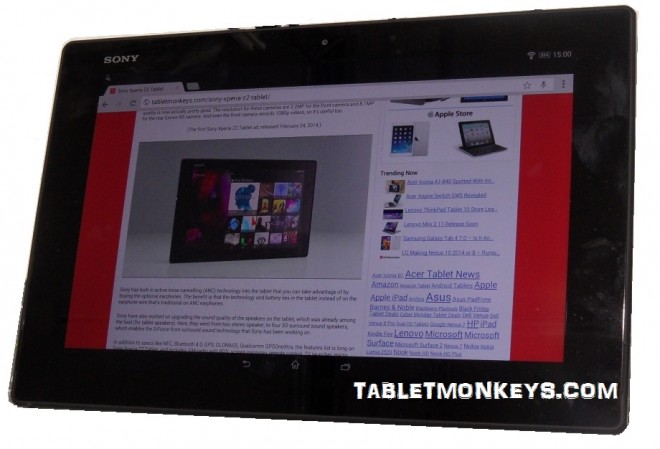 It’s a great Android tablet the Sony Xperia Z2 Tablet and well worth waiting for. With Android 4.4 KitKat, the fastest tablet processor with the brand new quad-core 2.3GHz Qualcomm Snapdragon 801 processor, 3GB of RAM, in a waterproof tablet that also happens to be the lightest and thinnest 10.1-inch tablet, it is lovely.

With the Full HD 1920 x 1200 display, there are tablets with higher resolution, like the 2560 x 1600 resolution of Samsung Galaxy TabPRO, but personally I find that as long as it has Full HD I find little need for a higher resolution. As we saw on the Toshiba Excite Pro which also featured 2560 x 1600 resolution, the high resolution didn’t mean anything in the end, since that display had such a horrible display quality anyway that the entire tablet became a flop. Display sharpness and neutral color reproduction is one of Sony’s strong points, and this tablet like all of Sony’s Android tablets before it, have a great display.

The 6.4mm-thin thickness is noticeable along with the extremely low weigh when you use it for a while. This is a tablet that is just asking to be used.