According to PCworld, Leonovo have stopped selling 8-inch Windows 8 tablets in the US, citing insufficient interest.

(UPDATED: Lenovo Will NOT Pull The Plug On 8″ Windows 8 Tablets In US)

PCworld says Lenovo said in an email that for now it would redirect inventory to the Asian markets where the demand for smaller Windows 8 tablets is stronger, but that it would be open to re-evaluate its strategy if the winds were in favour of selling the Lenovo ThinkPad 8 in the US again.

This step to halt sales of small Windows 8 tablets only affects two tablets, and these are the Lenovo ThinkPad 8, and the Lenovo Miix 2.

The Lenovo ThinkPad 8 is the most powerful 8-inch Windows 8 tablet that have been built, and the only one with a Full HD screen too, but these specs didn’t create enough demand for this tablet alone.
And since it has also had a high price and a few faults, it’s no wonder why the Lenovo ThinkPad became a Lenovo StinkPad that never caught on.

The move to halt the sales of Lenovo Miix 2 is more puzzling however, considering that this is one of the more popular Windows 8 tablets, and one that have been rated pretty highly by its owners as well. 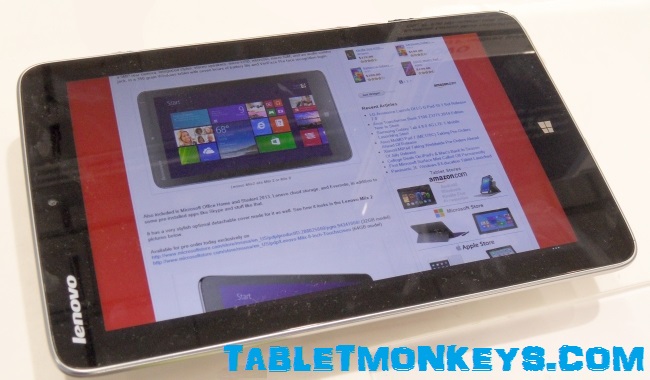 But if PCworld’s claims are real, and Lenovo isn’t making much money on this tablet, then it makes sense to disregard it in the US. It may also explain why Samsung have never made an 8-inch Windows 8 tablet, even when they have a tablet in every other form factor out there, and then some.

And while Toshiba may have launched a new Toshiba Encore 2 Pro the other day, that was actually a downgraded version, so I’m not sure if that counts.

Lenovo’s move should be watched carefully by Toshiba, who plans to release the first 7-inch consumer tablet with Windows 8 in August, called Toshiba Encore 7.