The first 7-inch consumer tablet with Windows 8 have been officially unveiled, and it’s the Toshiba Encore mini 7: http://www.microsoftstore.com/store/msusa/en_US/pdp/Toshiba-Encore-Mini-WT7

(UPDATE: Toshiba Encore mini WT7 was launched at IFA in September and is being released just days after, with the release date set to September 17.)

The announcement was made not by Toshiba, but by Microsoft’s OEM VP Nick Parker who unveiled the Toshiba Encore 7 alongside over 30 other new Windows mobile devices.

The specs for this 7-inch Windows 8.1 tablet are mixed. On the one hand it has a good quad-core 1.3GHz Intel Atom Z3735 processor and Windows 8.1, while on the other hand it has 1GB of RAM which is little for a Windows 8 device, 16GB of storage which again is little for a Windows device (fortunately it does have microSD card expansion), and an even less attractive 1024 x 600 resolution. 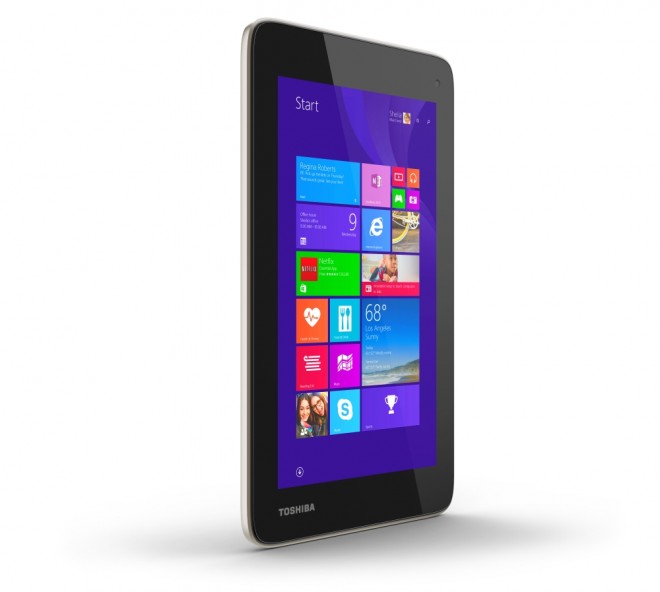 There’s also a 0.3MP front camera in the right top corner of this tablet, but no rear camera.
Release date is set to September for the Toshiba Encore mini 7, with a price of $119.

Before then the new low-cost $199 2nd generation Toshiba Encore 2 8 WT8-B will have been released too.

Obviously the specs of the Toshiba Encore 7 makes for a very unimpressive tablet, that’s a no-brainer. But it does help pave the way for a new category of tablets, as well as keep a bit of price pressure on Toshiba’s competitors. So kudos to Toshiba for at least breaking the mould.

which costs $180. That’s the cheapest Windows 8 tablet to date, but with only 1GB of RAM and 16GB of storage, it comes at a price.