Windows 8 tablets are on their way to be had for under $200 within a very short time.

Just last year the idea would have seemed crazy to most people, but now with increased success from Windows 8.1 over Windows 8, a growing number of smaller Windows tablets in the market, a wider choice of apps, and a new Microsoft CEO who just decided to give away Windows 8 for free to manufacturers of Windows mobile devices under 9 inches, $199 Windows 8 tablets are soon a reality.

The first Windows 8.1 tablets under $200 will be the 8-inch tablets, while the larger 10-inch Windows tablets will continue to sell from around $349 and upwards a little while longer. 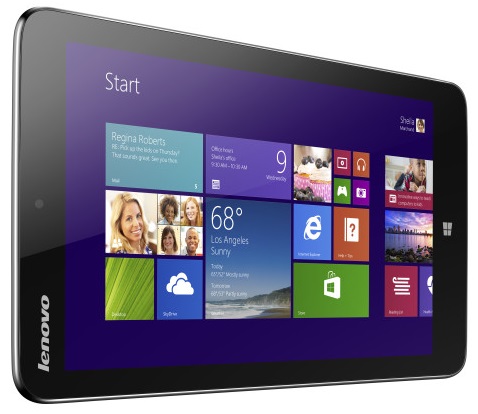 Acceptably equipped 8-inch Android tablets have a price of $179. At this price we are looking at a recognised mid-range quad-core processor at 1.6GHz and upwards, 1280 x 800 resolution, and 1GB of RAM, but otherwise no real discernible specs that sets them apart from their Windows competitors apart from entry 16GB storage models.

With the cheapest Windows 8 tablets, we are looking at good mid-range quad-core processors from 1.8GHz and upwards, the same 1280 x 800 resolution, 2GB of RAM, but with a minimum of 32GB storage, since the Windows OS itself can take up 5-6GB of that storage.

In addition to hardware specs, there is the obvious argument of software included. When you can get a full edition of Office bundled in for free with a $200 Windows 8 tablet, that’s a pretty good argument right there. Then on the other hand, if the only productivity a consumer is looking for in a tablet is setting new personal records in a popular computer game, then the free Office bundle probably won’t make much of an impression.

When the second wave of 8-inch Windows 8 tablets hit the market last fall, the cheapest ones cost $299 with 32GB of storage. Lenovo Miix 2 currently costs under $215, with Toshiba Encore selling for the same price most of the time. Dell Venue 8 Pro sells for $229 regularly, which includes free shipping. Lenovo Miix 2 and Dell Venue 8 Pro have been fighting over domination, since they both generally score the same in tests, though with the present firmware, Dell seems to have the upper hand in battery life, not to mention that the screen is a little bit better.

Higher up on the scale, the recently released 8.3-inch Windows 8.1 tablet Lenovo ThinkPad 8 with Full HD 1920 x 1200 resolution and a 2.4GHz Intel Atom processor have just been cut from the $449 launch price to $399. Not as cheap as those other tablets, but still sending its price in the right direction very fast.

With Microsoft improving flaw after flaw in Windows 8 with each new OS update, Windows 8 tablets – old and new, should just become more and more interesting to own from now on. 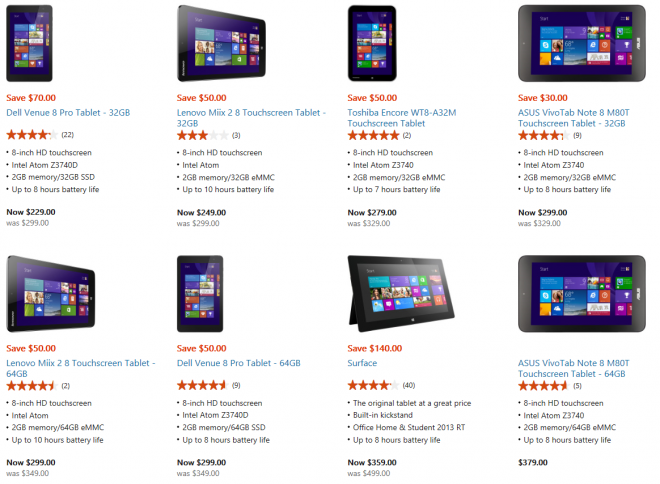