The 8-inch Windows 8.1 tablet Toshiba Encore 2 Write 8 with active Wacom Digitizer was released today on January 5th, for a price of $349: http://www.amazon.com/Toshiba-Encore-WT8PE-B264/

The Toshiba Encore 2 Write 8 Signature Edition is also available for order from Microsoftstore.com

The Toshiba Encore 2 Write (WT8PE-B264) differs from its sibling Toshiba Encore 2 Pro that was released in July in that it has support for an included Wacom digitizer pen, as well as higher specs overall. But it still looks very much the same, with that elegant satin gold finish.

The specs for Toshiba Encore 2 Write 8 begins with the quad-core Intel Atom Z3735F processor with 1.33 GHz to 1.83 GHz speeds, the same processor that most of the 8-inch Windows 8.1 tablets run today. It has 2GB of DDR3L RAM, 64GB of storage as standard which can be expanded through the Micro SD/SDHC/SDXC card slot, and it has one year of unlimited OneDrive online storage.

Toshiba Encore 2 Write 8 comes preloaded with Windows 8.1 with Bing, and a one year subscription to Office 365 Personal.

The tablet then has an 8-inch screen with 1280 x 800 resolution, with 16:10 aspect ratio and 10 point multi-touch support. More importantly with this tablet is the support for an active Wacom digitizer pen. At the moment, it’s only this tablet and the Asus VivoTab Note 8 that have that quality in this tablet category.

Toshiba’s properly sized WACOM Active Capacitive Pen is not embedded into the tablet, since the tablet is too thin to hold a full size digitizer pen. Which marks the difference between this tablet and that of it’s rival from Asus too, since the Asus VivoTab Note 8 only have a thin digitizer embedded.

But Toshiba have made a small hole in the bottom of the tablet that the clip of the WACOM Active Capacitive Pen can be slipped into.

The battery life is the best in this tablet category, with a battery life up to 11.1 hours long.
For connectivity, it has 802.11 a/g/n Wi-Fi and Bluetooth 4.0. The sensors Toshiba have fitted to it are digital compass, GPS, gyroscope, and a 3-axis accelerometer.

It has a 8MP rear camera, and a 1.2MP front camera, while the stereo speakers are enhanced by Dolby Digital Plus audio technology.

So of all the tablet Toshiba have made to date, this is by far one of the most exciting ones.

Additional ports on Toshiba Encore 2 Write 8 are a micro-USB 2.0 port and a 3.5mm audio combo jack. The tablet itself is 9.4mm thick and weighs 379 gram. 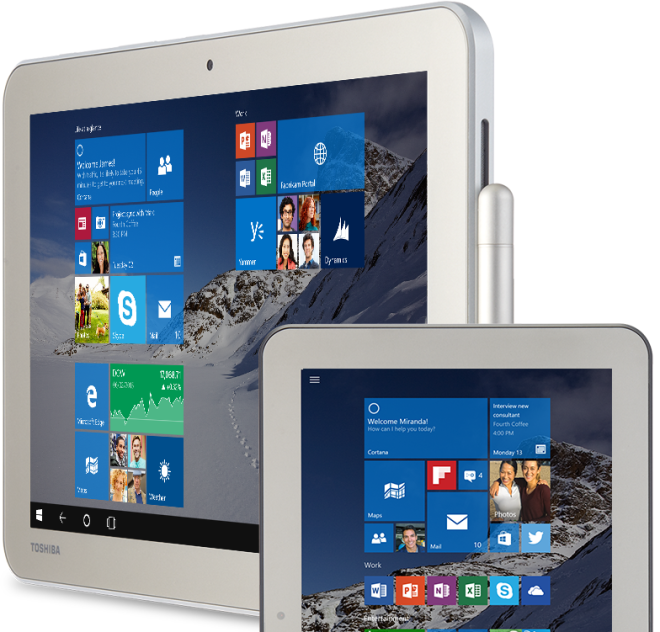 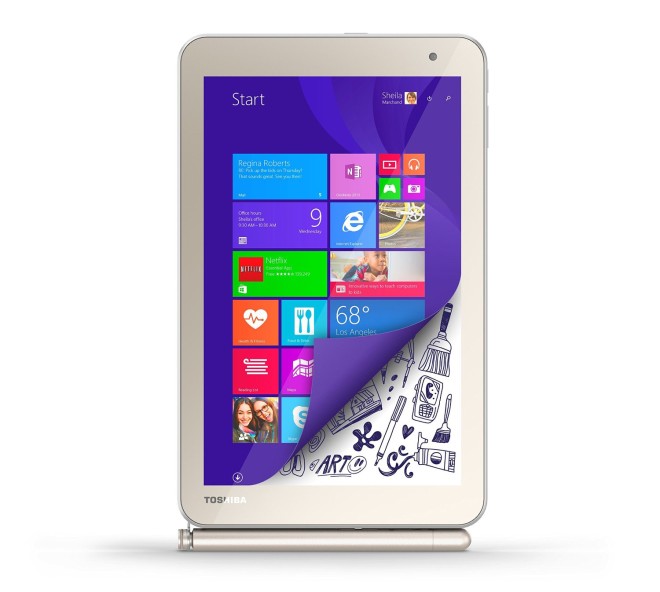 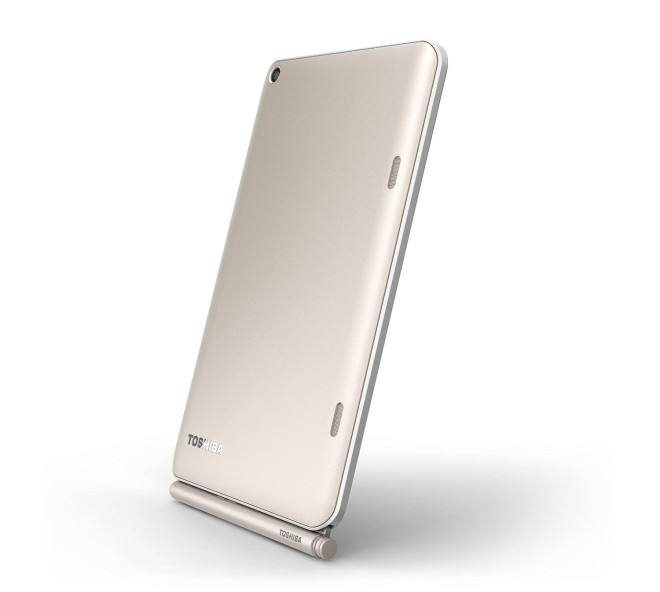 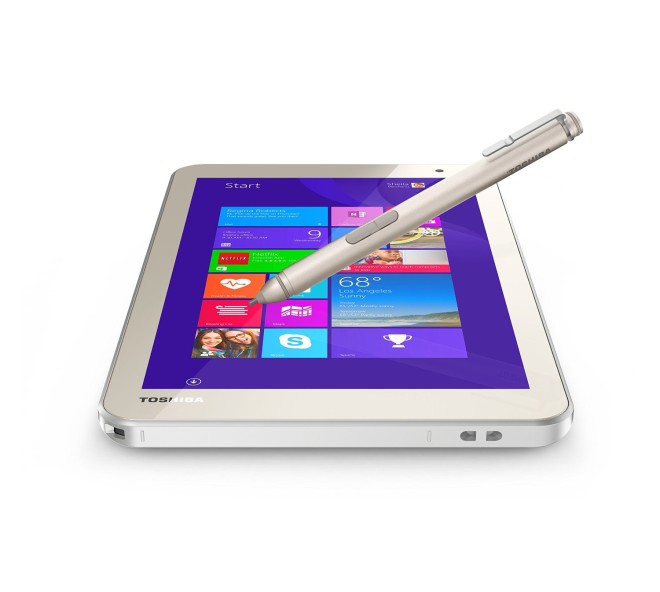 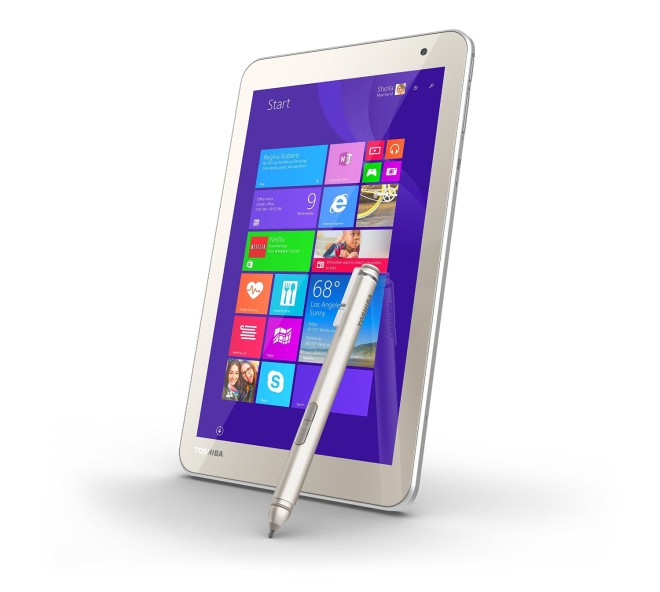 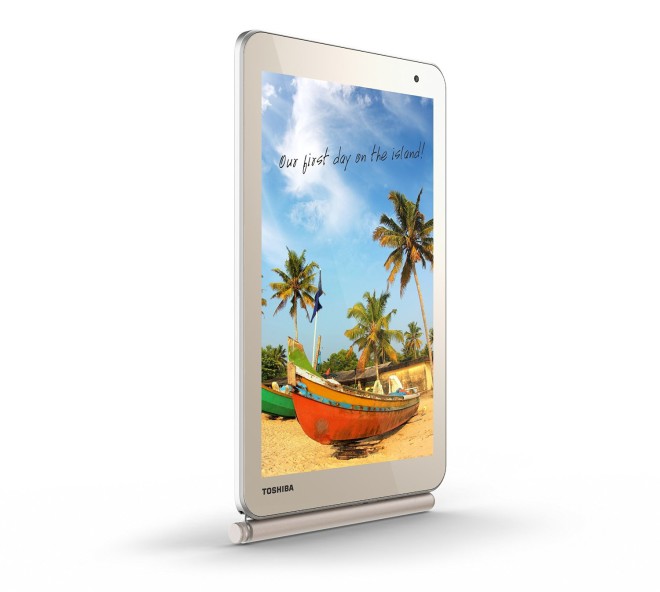