The as of yet unannounced Samsung Galaxy Tab E 7.0 (SM-T280) has been benchmarked overnight, and should be ready for launch in January 2016, with a possible unveiling at CES in early January.

This is the third Android tablet in the Samsung Galaxy Tab E series so far. Samsung Galaxy Tab E 7.0 (SM-T280) has been benchmarked with specs such as Android 5.1, a 7-inch screen with 1280 x 800 resolution, a quad-core 1.3 GHz Spreadtrum SC8830 processor with a Mali-400 MP2 GPU, 1.5GB of RAM, 8GB storage, a 0.3MP front camera, and a 5MP rear camera, along with the sensors accelerometer, proximity sensor, GPS, in addition to Wi-Fi and Bluetooth of an as of yet unspecified caliber.

The Samsung Galaxy Tab 4 7.0 was launched in April 2014, but was not replaced in 2015. So will the new Tab E replace it, or will the Tab E be made by Samsung on behalf of wireless carriers and companies like Barnes & Noble who will then sell them as a part of their own tablet offerings?

The Samsung Galaxy Tab 4 7.0 is actually a good little performer, though you can actually get a Full HD Nexus 7 for the same price these days, and the Nexus 7 is even better in most areas. It even runs Android 6.0.

We’ll have to wait and see until 2016 how Samsung is thinking about pursuing the Android tablet market. 2015 did break some traditions in the tablet industry, and strategies are expected to change once again in 2016.

So in 2015, it has been the Tab E tablets that have continued with the familiar widescreen format of the Tab A tablets 1 to 4. 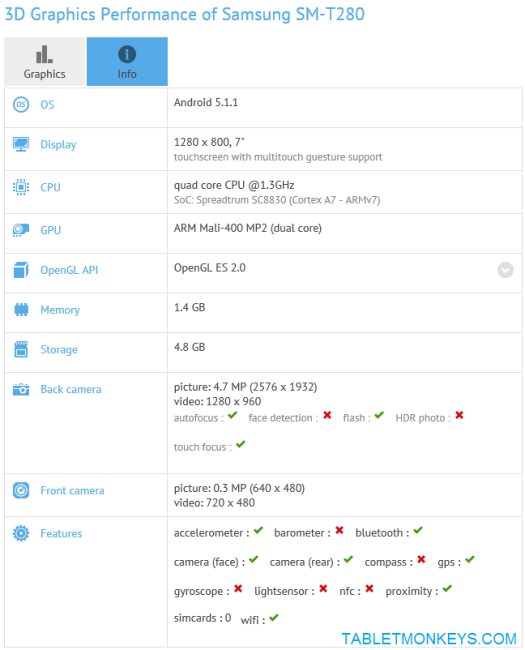