Samsung announced the Samsung Galaxy Tab A 9.7 in the US today, where this tablet now has a May 1 release date. It’s available for pre-order too ahead of launch, starting at price of $299:
http://www.amazon.com/Samsung-Galaxy-SM-T550NZAAXAR-9-7

(UPDATED: Samsung has since confirmed that Samsung Galaxy Tab A will get Android 6.0 Marshmallow upgrade.)

The Samsung Galaxy Tab A 9.7 was first announced in Russia in March, so the news here concerns the availability of it in North America.

Samsung Galaxy Tab A 9.7 is released with Android 5.0 Lollipop, and has a 9.7-inch screen with a resolution of 1024 x 768 to accommodate the new 4:3 aspect ratio (same as iPad’s), which is much better for browsing the web than the former 16:10 screen ratio of the Galaxy Tab 4 line. Both text and images are sharp and clear on the display, which you expect from a Samsung tablet. 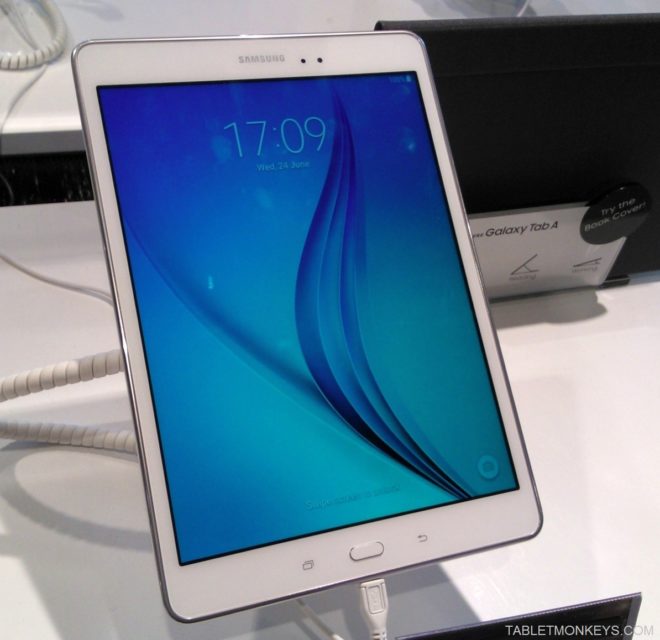 It’s powered by a 1.2 GHz quad-core Qualcomm Snapdragon 410 (APQ 8016) processor, with 1.5GB of RAM, and 16GB/32GB of storage. Storage can be expanded with microSD cards up to 128GB, and in addition to that, this tablet also ships with Microsoft Office for Android installed which provides owners with 2 years of free 100GB cloud storage on Microsoft OneDrive.

Samsung Galaxy Tab A 9.7 have dual cameras, with a 2MP front camera, and a 5MP rear camera. Sound comes from stereo speakers or the 3.5mm audio jack.

Sensors include accelerometer, RGB light sensor, TouchWiz, and for location technology it has GPS, Glonass, and Wi-Fi location services.

The Samsung Galaxy Tab A models are also the first tablets to release with Microsoft Office for Android tablets, so in addition to it has features like Enterprise-Ready, Corporate E-mail/Calendar/Contacts, Mobile Device Management, On-Device Encryption (ODE), SAFE, SAFE with Knox, and Virtual Private Network.

Samsung have also incorporated their parental control system Kids Mode into this tablet, which lets adults control what and for how long they want kids to be able to access on their tablet. A related feature is Multi-User mode that works the same way Profiles/Accounts does on Windows computers. 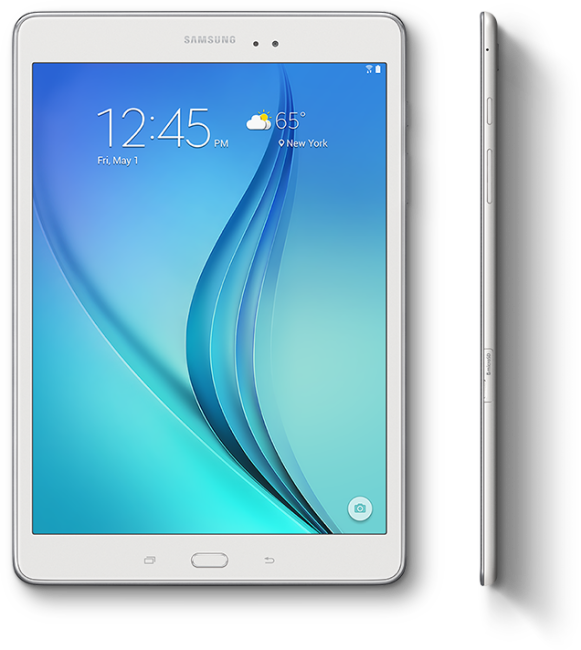 Another feature it comes with is SideSyn for direct synch with smartphones or computers. And it has Multi Window multitasking support, so you can run more than one app or keep more than one window open at the time.

Samsung Galaxy Tab A is only 7.5 mm thick, so that’s pretty good for a cheap tablet, while the weight is 449 grams for the 16GB Wi-Fi model.

There are three color options to chose from, and they are white, black, and smokey blue. The two small circles on the back of the tablet is there to connect with official Samsung tablet covers. 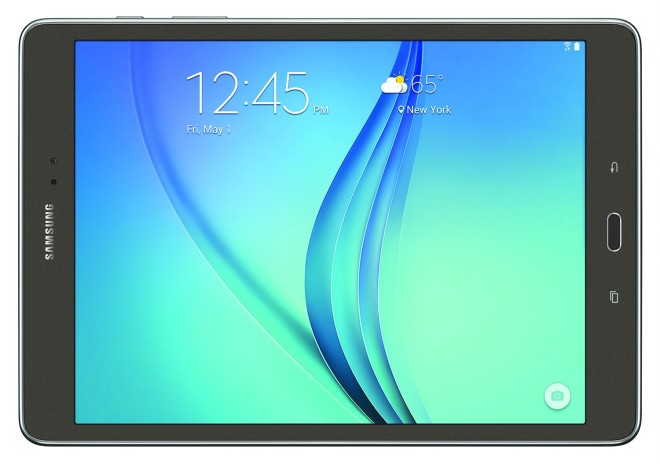 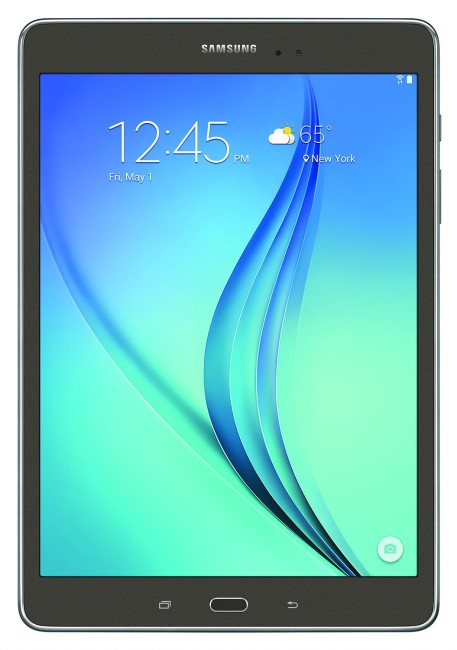 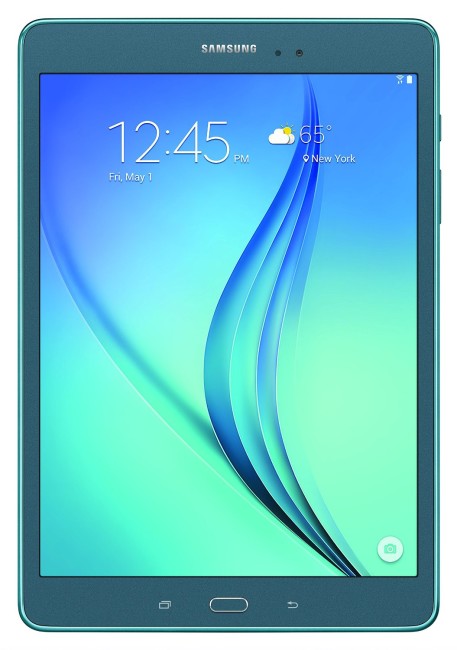 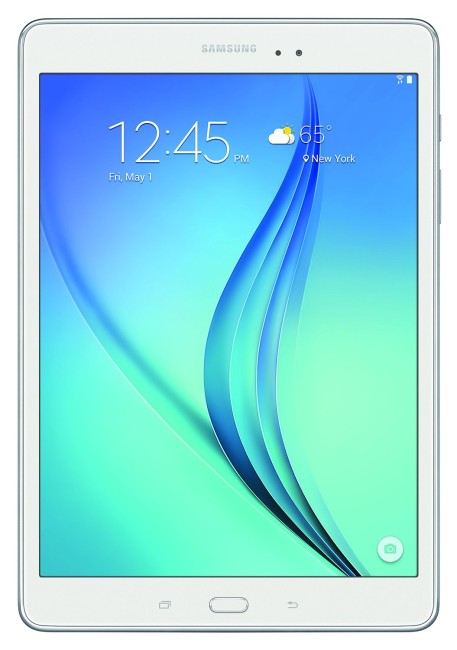 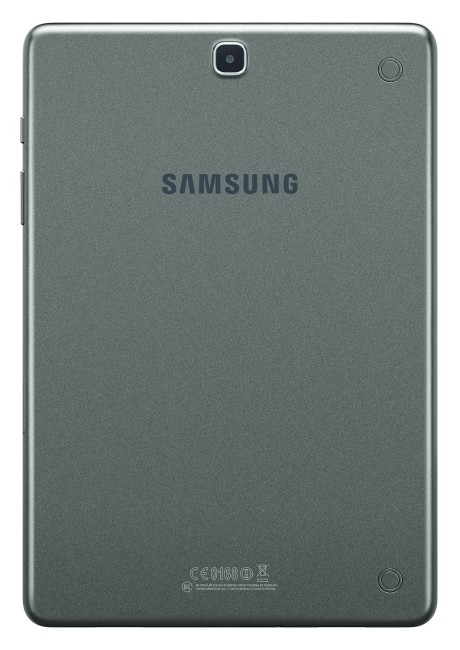 Samsung Galaxy Tab A 9.7 back

Samsung Galaxy Tab A 9.7 side

Samsung Galaxy Tab A 9.7 tablet side