Samsung made an official announcement today to celebrate it’s market share of the 5G market, when it stated that Samsung shipped over 6.7 million 5G smartphones in 2019, which included the foldable tablet phone Galaxy Fold / W20.

With those figures, Samsung believes it had 53.9% of the 5G smartphone market in November 2019. But they also said that 2020 will be the year of the Galaxy 5G, where more devices will be launched.

And on that note Samsung stated that the Samsung Galaxy Tab S6 5G will be launched in South Korea in Q1 2020, which may still be in time to make it the world’s first 5G tablet. 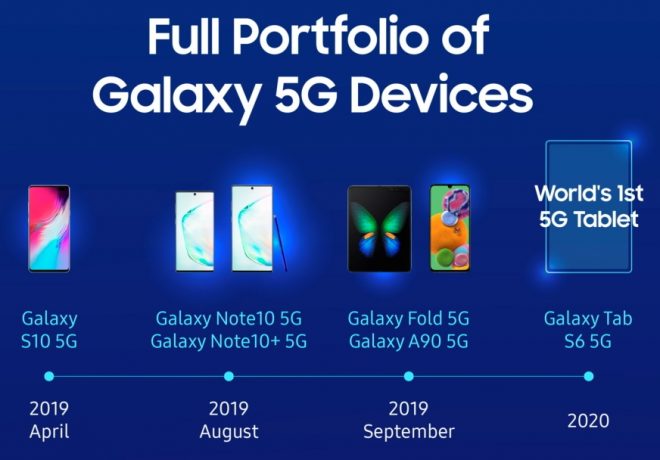 Of course we already wrote about the South Korean launch of the Samsung Galaxy Tab S6 5G before Christmas, so now we just have to await the details about this upcoming tablet.

5G modems or chips are expected by industry insiders to stay at over $100 through the first half of 2020, which is several times the cost of a 4G modem, so 5G will continue to make the first 5G tablets significantly more expensive than 4G tablets through 2020.

Two other new Samsung tablets that are in the works are the Samsung Galaxy Tab A4S (SM-T307U) and Samsung SM-P610/615.