Nvidia announced today that they are initiating a voluntary recall of their very popular 8-inch Android gaming tablet Nvidia Shield Tablet, due to a potential fire hazard posed by a overheating battery. The recall is said to affect 88 000 tablets, but the fault does not affect all Nvidia Shield Tablets. See image below for instructions on how to find out if your unit is affected.

Nvidia is asking owners to stop using their Nvidia Shield Tablet immediately and will replace all tablets that are affected with a new one. Specifically Nvidia announced that:
“NVIDIA is also asking consumers to stop using the recalled tablet, except as needed to participate in the recall and back up data. Consumers will receive a replacement tablet after registering to participate in the recall. NVIDIA is coordinating with appropriate governmental agencies to ensure that the recall follows established industry practices.”

Owners of the Nvidia Shield Tablet sold between June 2014 and July 2015 are asked to visit: http://tabletrecall.expertproductinquiry.com/registration/registration
to either return the tablet and get a replacement, or to use the serial number to check if their unit is affected by the recall. 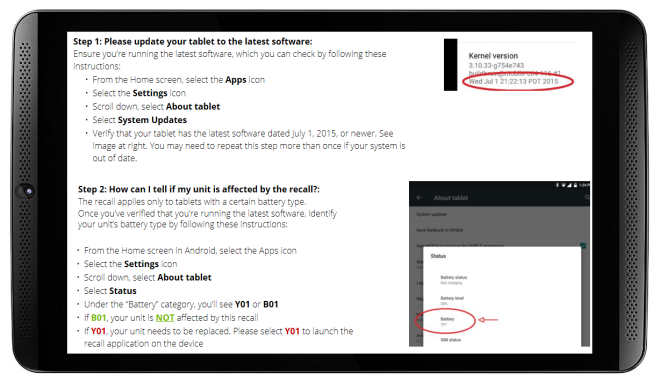 If you have any other questions you want to discuss with other Nvidia Shield Tablet owners, there are already several discussions going on about the issue in this forum https://forums.geforce.com/default/board/150/

The overheating battery issue isn’t completely new as a few owners have experienced this before, as you can see in the video below. It’s not the first time there’s been problems with the Nvidia Shield Tablet either, since a couple of Nvidia Shield Tablets developed cracks in the corners just a few weeks after it was launched.

And if you are curious about what it looks like if the battery inside a tablet blows up, take a look at our article from last year: RCA Tablets Blows Up