So this explains why the launch was pushed back and back every month, despite all the previous leaks coming out, indicating that this gaming tablet would launch in the first part of 2016. 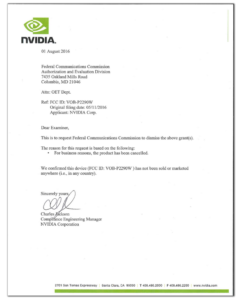 Nvidia Shield Tablet X1 has never been announced or unveiled by Nvidia, but it leaked as far back as in November 2015, when it was benchmarked with the Tegra X1 processor and 3GB of RAM.

New leaks for this gaming tablet would appear at regular intervals up until its FCC filings were published in May, which revealed some more of its specs.

But none of that matters now that Nvidia have cancelled the successor. We can only speculate why.

Earlier this morning Reuters reported that South Korean media Chosun is quoting anonymous sources who says that Nvidia have selected Samsung to manufacture their next generation graphics processor. According to Reuters, Samsung will manufacture these GPU’s for Nvidia with Samsung’s 14-nanometre technology at the end of 2016.

The Nvidia Shield Tablet K1 is out of production, so if you want a dedicated 8-inch gaming tablet, that only leaves the Acer Predator 8. The new version of the octa-core Samsung Galaxy Tab S2 is a more powerful choice though, and the price is the same.