And the Nvidia Shield Tablet X1 specs are just like you would expect, with the 1.9 GHz Tegra X1 processor and GPU as the central piece. It also seems to get 3GB of RAM, which is 1GB more than the current 2GB of the re-launched Nvidia Shield Tablet that went on sale a few days ago for $199.

Other than that, Nvidia seems to stay with their success formula, meaning an 8-inch screen with Full HD 1920 x 1200 resolution, and Android 6.0. The benchmark lists sensors and technology like front camera, rear camera, accelerometer, lightsensor, barometer, gyroscope, compass, GPS, Wi-Fi, and Bluetooth, but the features listed in GFXbench benchmarks are always incomplete, so we’ll just have to wait and see until the finished product becomes available, or leaks again before we can judge this new gaming tablet on all its details.

Gaming tablets are becoming more and more popular every year, and as we have seen, even Acer have thrown themselves into the game now with their very different looking Acer Predator 8 gaming tablet, a rival to the Nvidia Shield Tablet.

Considering the timing of the benchmark, it’s difficult to predict when the 2nd generation Shield Tablet will be launched. JXD will launch their new JXD Singularity on non other than new year’s eve. But JXD’s gaming tablet will run the Tegra K1 processor, while Nvidia is stepping up a bit. 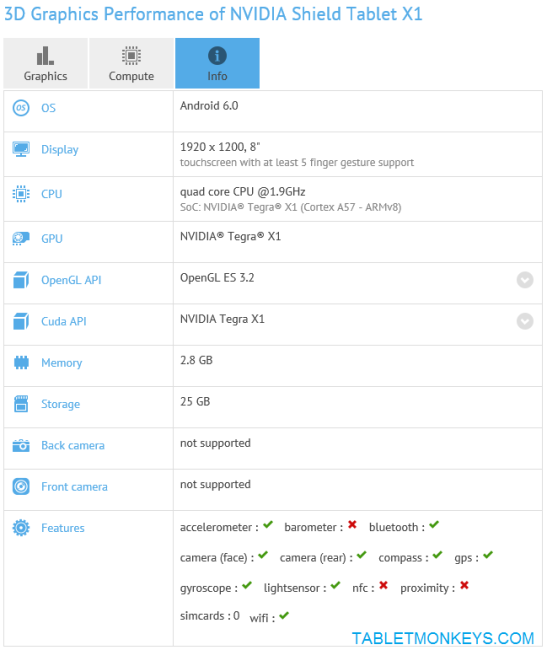