Amazon KFGIWI, what may be the model name of a new 8-inch Amazon tablet, may have leaked after something by this name was submitted for benchmark testing three times over the last few days.

The current 8-inch Amazon Fire tablet leaked just a few days prior to launch, and leaked as Amazon KFMEWI.

There are a few hardware differences between the benchmarks of these two models. The differences between the current Fire HD 8 and the alleged Amazon KFGIWI, are in the upgrade from a ARMv7 to ARMv8 64-bit processor, still from MediaTek, but now a 1.3 GHz MediaTek MT8163 processor with Mali-T720 graphics processor. This processor is already used by Acer Iconia One 10 (B3-A20), and is coming to a few more Android tablets that will launch in Q2 and Q3 of 2016 too.

The alleged benchmark of a new 2016-2017 model Amazon Fire tablet coincides with todays announcement of the new Kindle Oasis. 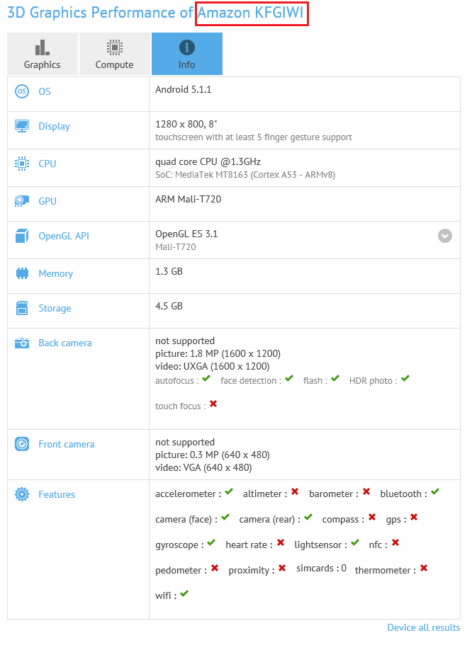