And the Amazon Fire HD 8, just like the ultra cheap 7-inch $49 tablet Amazon Fire, is a tablet that’s bought to a large extent because of the Amazon ecosystem of 38 million titles of movies, books, apps, magazines, games, and music. $149 isn’t a whole lot of money for a well built 8-inch tablet, but since some of the other tablet brands already have cheaper 8-inch tablets than that, the Amazon Fire HD 8 still has its share of competition among Android tablets.

The main specs for the Amazon Fire HD 8 are standard entry level 8-inch Android tablet specs as of 2015. It has an 8-inch wide-angle IPS screen with solid Gorilla Glass and a display resolution of 1280 x 800. The processor in the Fire HD 8 is a quad-core 1.5 GHz MediaTek MT8135 which offers a solid performance and the graphics processor is a Imagination Technologies PowerVR Rogue G6200 GPU, while it has 1GB of DDR3 RAM, and options of either 8GB or 16GB of storage. But the new Fire tablets also got microSD card support in 2015, and they all support microSD cards all the way up to 128GB for cheap storage expansion. 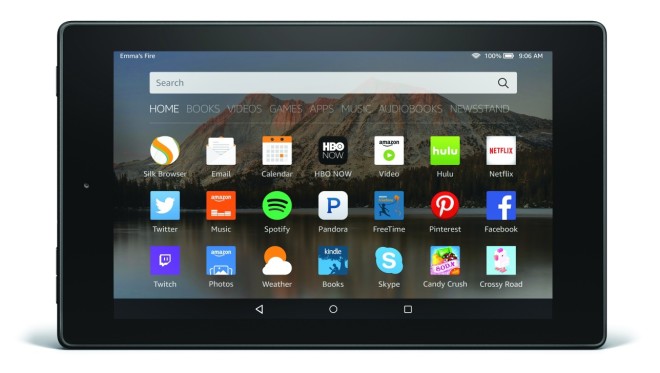 Those specs are average for 8-inch tablets in the $149 price range, but the rest of the specs for the Fire HD 8 are better than average. It has complete Wi-Fi cover with support for all dual-band a/b/g/n/ac 802.11 channels and bands. It also has Dolby Atmos stereo speakers which offers high volume without distortion and 5.1 virtual surround sound, and it has 0.9MP front camera with 720p HD video recording support, and a 5.1MP rear camera with 1080p Full HD video recording support. The battery life is 8 hours long.

With a weight of 311 grams and a thickness of 7.7 mm it’s also slimmer than most tablets in the 8-inch category. It also has some fresh color options in addition to black, and those are blue, magenta pink, and tangerine orange.

As far as alternatives and competition to the Fire HD 8 goes, the two newest 8-inch Android 5.0 Lollipop tablets that can compete with the Fire HD 8 in the $149 category are the Asus ZenPad 8.0 and the Lenovo Tab 2 A8. But neither of them have a combination of specs that makes them any better tablets. The ZenPad 8 is even a little underpowered, while the Lenovo lack the latest ac Wi-Fi support.

So even just based on specs, the Amazon Fire HD 8 is the best equipped tablet overall in the 8-inch Android budget tablet category. 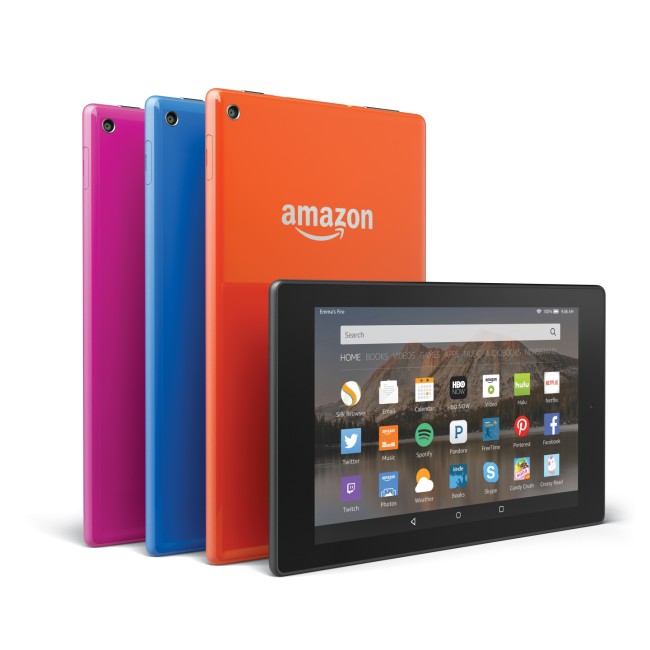 And it’s the only tablet in the category with the Android 5.1 based Fire OS 5 Bellini, which is good if you subscribe to Amazon services and get media content from Amazon and the Amazon ecosystem, but perhaps not as interesting if all you want is a stock Android 5.0 tablet.

The list of services and features for new Fire tablets have grown very long in 2015 and now include the new Amazon Underground appstore/appland, the Fire tablets On Deck automatic related movie and TV-show download by Amazon for always having new offline content, parental apps like FreeTime and ActivityCenter to keep tabs on how the kids use the tablet and content, free live help night and day with Mayday Screen Sharing from Amazon for immediate help with any feature and service you need on your Fire tablet, TV-screen sharing, household sharing of apps and content (Family Library), free cloud storage for all the pictures you take with your Fire tablet, together with all the many other Amazon and Fire OS services and features that have been added over the years. 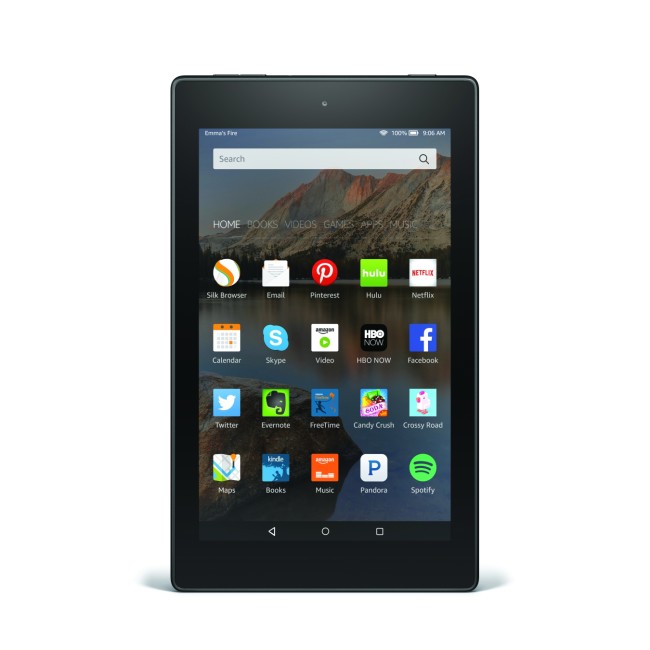 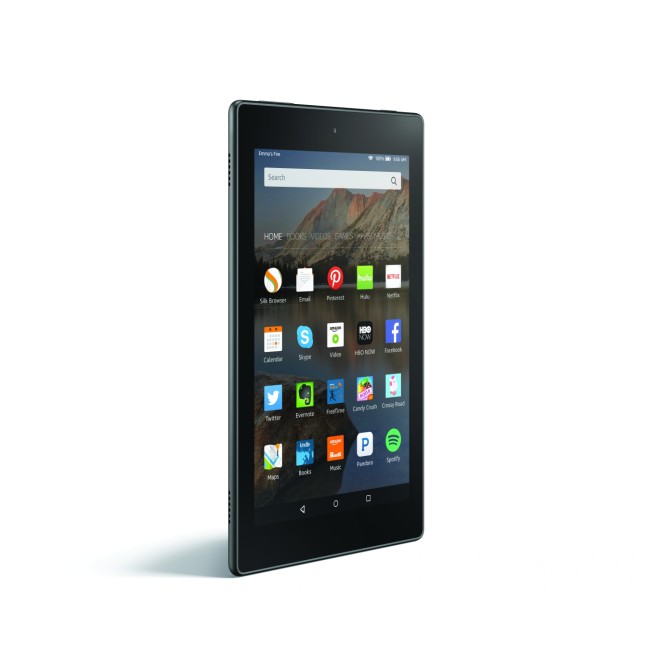 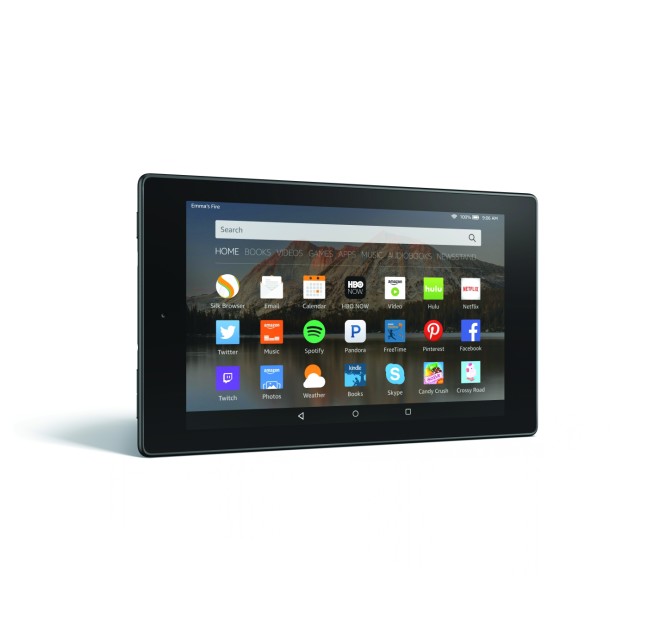 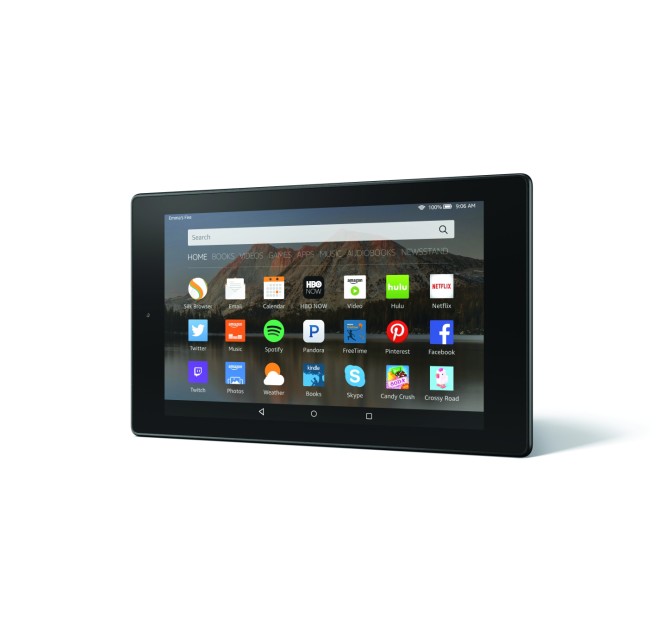