What is new with the new Amazon Fire HD 8 2016 to 2017 model is 50% more RAM now up from 1GB to 1.5 GB of RAM, higher 16GB and 32GB storage options along with 200GB microSD card expansion support, a newer quad-core processor, Alexa inclusion, and a battery life that has gone up from 8 hours to 12 hours on the new tablet model. And best of all, the price has gone down from the launch price of $149 last year, to just $89 on the new and improved tablet. This is now the cheapest 8-inch tablet on the market of the renowned quality brands, and the quality of Amazon’s tablets have always been high.

Amazon’s move is the opposite of what we saw from Apple yesterday, who dropped the 3.5 mm audio jack on the iPhone, intended to get people to buy expensive $149 Apple earphones to fit the new iPhone. So Amazon’s approach is the opposite. In fact, Kevin Keith who is the General Manager of Fire Tablets said today that: “We believe in a different approach to tablets — providing premium products at non-premium prices — and customers love it. In fact, we’ve seen Fire tablet sales more than double year-over-year as a result.” 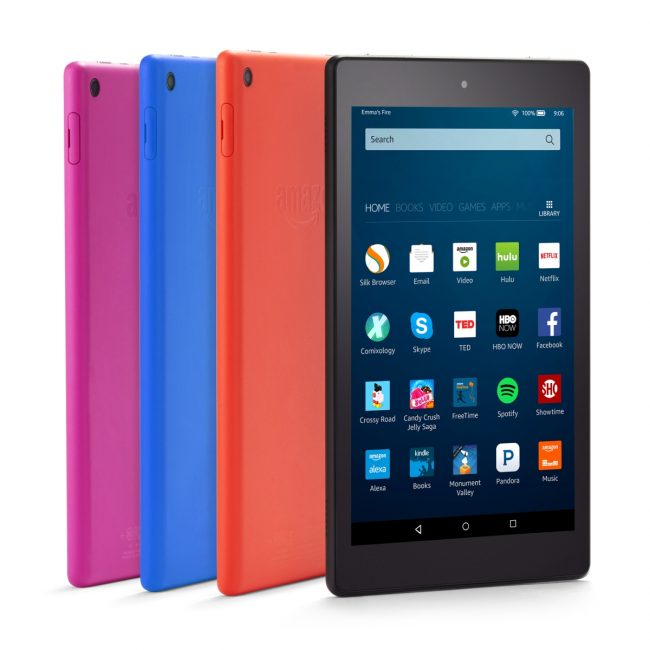 New Amazon Fire HD 8 specs are entry level 8-inch Android tablet specs as of 2016. The 8-inch wide-angle IPS screen has a HD display resolution of 1280 x 800 and is protected by Gorilla Glass so that it can withstand scratches and falls to the ground.

The processor in the new Amazon Fire HD 8 is a step up from the former ARMv7 to a ARMv8 64-bit processor now with a 1.3 GHz MediaTek MT8163 quad-core processor together with a Mali-T720 graphics processor (GPU). It has 1.5 GB of DDR3 RAM, 16GB and 32GB storage options, and Amazon has worked with SanDisk to develop certified compatible microSD cards for the Fire tablets, and this new tablet has support for microSD memory cards with up to 200GB of storage capacity. These are called “Made For Amazon” memory cards.

Battery life is 12 hours long which is among the best on 8-inch tablets, while the actual new Fire HD 8 battery capacity is 4750 mAh. Internet connectivity comes from dual-band 2.4 GHz and 5 GHz 802.11 a/b/g/n Wi-Fi support and Bluetooth 4.1, while it has a micro-USB port, accelerometer, gyroscope, and ambient light sensor.

The audio is still Dolby Atmos for the stereo speakers, while it has a 0.3MP front camera and a 2MP rear camera. The thickness of the tablet is 9.2 mm while the weight is 341 grams. Color options are black, blue, pink, and tangerine orange.

This tablet is very much about features of course, with its Android based Fire OS and integrated as it is into the gigantic Amazon ecosystem of millions of titles of movies, TV series, books, apps, music, as well as all the various Amazon service, ranging from the mayday button where you can get live help on the screen 24/7 – then over to features like Whispersync, Vocabulary Builder, Page Flip, Blue Shade, the latter of which will minimize blue light before bedtime to avoid eye strain and interruption of the internal body clock from the light of the display.

Parents can also activate kids mode so that they can control how much time kids can spend with the tablet, and also what they will be allowed to access. Amazon will also add the Alexa personal assistant/ voice service to all Fire tablets soon, where people can talk to the tablet to get it to open apps, make notes, ask questions and look up information, tell it to play music, set alarms, and more.

For those who just wants the cheapest regular 8-inch Android 6.0 tablets without Amazon’s Fire OS, then the alternatives would be the Asus ZenPad 8.0 ‏(Z380M) and Lenovo Tab3 8, but they cost $129 and $139 respectively.

Since the new Amazon Fire HD 8 has a different exterior than before, Amazon had to build a new tablet case with stand for it as well. This tablet case is simply called Amazon Fire HD 8 Case and is the type of origami case that Amazon introduced a while back, with support for portrait and landscape mode, automatic wake and sleep activated by the magnetic cover, and a microfiber interior that protects the tablet.

And to match the tablet, the tablet cases comes in black, blue, pink, and orange too.

So once again Amazon has the cheapest tablet on the market, and this time in the 8-inch category. For those who are already users of the Amazon ecosystem this tablet makes a lot of sense and offers good value for money. For those who just want a regular Android tablet, there are many options, but it will cost a lot more, as we saw with the cheapest alternatives from Asus and Lenovo in the links above.

But for those who want an easy to use tablet with instant 24/7 free support from Amazon at the push of a button, this is the easiest tablet to use by far. 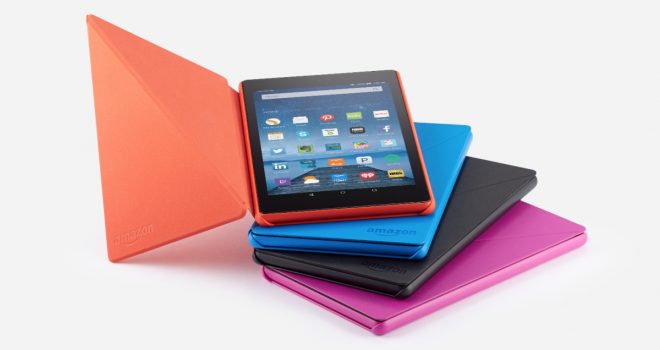 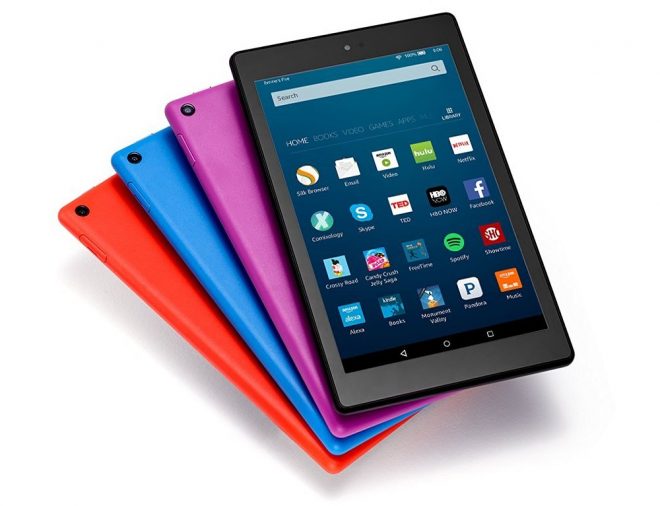