You may remember the rumors surround a hypothetical Microsoft Surface Mini / Surface Book / Surface 7.5 from a while ago. Well, the new rumors that have surfaced lately have been getting narrower.

But they are still just rumors. However, they point to a third Surface tablet to appear along its two bigger 10.6-inch siblings. Last year, there were documents pointing to a 7-inch Surface Mini prototype, but that never materialized, and since then the focus seemed to shift to a larger 8-inch Windows tablet from Microsoft.

Since that time Microsoft has undergone two significant changes. One was the introduction of the more popular second generation Surface tablets, the other change was with the new SEO of Microsoft, Satya Nadella. And with the new SEO came better judgments, more in tune with the needs of the people it seems.

So it’s not much of a surprise that the present rumors concerning the potential Microsoft Mini now focus on a productivity tablet with good features and good specs that might be able to do things that other 8-inch Windows tablets are not capable of at the moment. 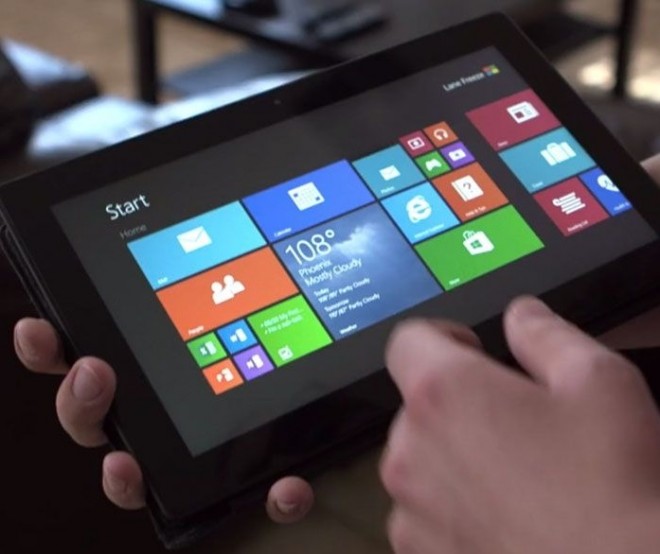 A smaller me? The display of the 10.6-inch Surface in use.

And these features are basically just the combination of a proper digitizer inclusion combined with lots of apps and multitasking features that can make the digitizer do things on the tablet, that so far only the Wacom-supported Asus VivoTab Note 8 comes close to managing. But the Surface Pro tablets already have both multitasking and digitizer support, so Microsoft already have some experience to build on.

A lot of people are holding out for an 8-inch Windows 8 tablet that have plenty of RAM, a well above average processor, a Full HD resolution display, thought through digitizer support, and additional features that makes it lovable and good value for money.

Something akin to what the Samsung Galaxy Note 8 was in the Android world last year, only with specs more similar to the high-end Samsung Galaxy TabPRO 8.4 instead.

The first rumors said that the Mini would run Windows RT, which would have made the Mini a disaster at the same level as the first Surface RT. So the belief is now that it will run regular Windows 8.1. Before Nokia was bought by Microsoft, it was suggested that Nokia was working on a 8-inch Windows tablet itself codenamed Nokia Illusionist or Nokia 2020, that would also run Windows RT. But after the takeover it was last heard that this tablet project was dithced.

There were rumors about Kinect-recognised gesture controls as well, but the question is if this is something people would actually want or if it’s merely something that would make a Mini sound cool.

Unfortunately there are no reliable leaks for the Mini just yet, but it does appear that a Surface Mini is being tested and configured. But if this tablet does materialize, it probably won’t be before mid-summer anyway. And by then, it will be interesting to see if Samsung will have continued to stay absent from the only category where they don’t have a tablet yet.

Multitasking and digitizer already available on the Surface Pro 2