What could be the next Microsoft Surface tablet, 2-in-1, or laptop have been approved by the FCC under the description portable computing device, with Microsoft’s internal model number 1824.

Microsoft is always very good at hiding just enough specs to make out for sure what device it is in advance, so we can’t tell for sure what Surface computer this is yet, but at least it shouldn’t be the new Surface Studio, but rather anything ranging from the new 10-inch Surface to one of the larger Surface tablets and laptops.

Though given the description it was filed under, this new Surface should fall under the 2-in-1 tablet category.

Microsoft Surface model number 1824 as illustrated for the FCC

Industry insiders in November last year first believed Microsoft would be able to launch a new Surface within the first half of 2018, without knowing which model.

Then in the middle of May it was rumored with much more specific detail that a new Surface 4 tablet would be launched in the second half of 2018, as a Windows 10 Pro 2-in-1 tablet in the 10-inch tablet category, described as having round edges yet also a kickstand, powered by an Intel processor and GPU, with 64GB and 128GB storage options, with optional 4G LTE, and featuring a USB Type-C port, and new charging and syncing features.

Based on the few official specs leaked for Surface model number 1824 so far, these specs fits that model, though it’s still too early to tell if this is indeed the new “Surface 4”. But at least we know we are close. Microsoft actually prefers to have their FCC records published after a product unveiling, so we could be really close to a new Surface launch. 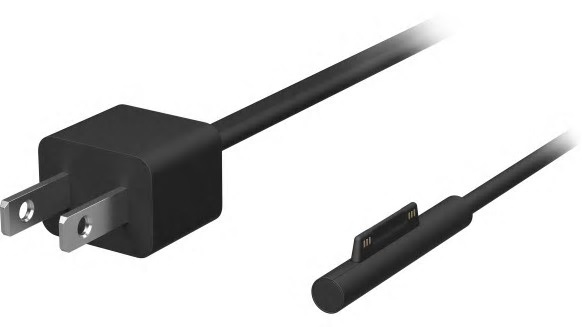 The charger used during the approval of the new Surface