And as a lot of owners have been curious abut, it’s not just the Android 7.0 update that’s coming to the Huawei MediaPad M3 soon either, but a new version of the Huawei user interface too, which will be updated from Emotion UI 4.1 to EMUI 5.0 too during the spring. 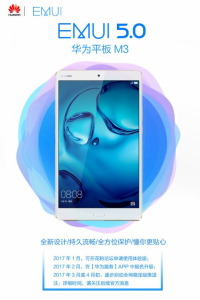 Two other tablets that have officially had an upcoming Android 7.0 update announced this week, are the Samsung Galaxy Tab A 10.1 with S Pen and the two editions of the Nvidia Shield Tablet.