Ever since the Samsung Galaxy Tab S3 notice that was placed on Samsung Colombia’s website was picked up yesterday, even though it’s been there since mid-July, I’ve been asked about the details for it.

But so far no new Tab S3 other than New Samsung Galaxy Tab S2 (2016) models that will be rebranded in September have leaked. These are the SM-T813/819 and SM-T713/719 models we have already covered (additional 817/818 and 717/718 models also exists). These tablets would however benefit from being called Tab S3, so that people would become aware of the changes between the old and new Tab S2’s. 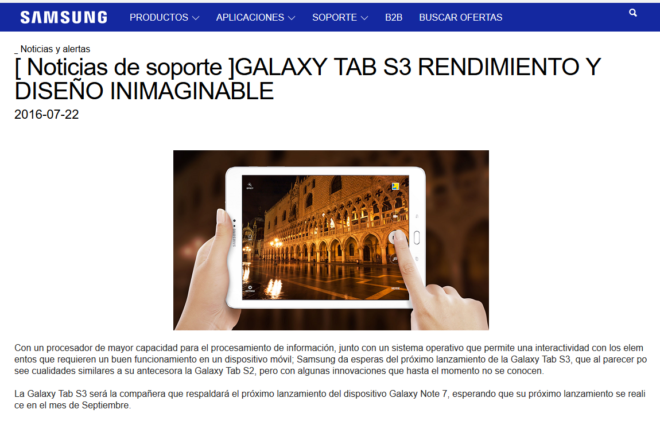 The screen capture from Samsung Colombia

The Samsung Colombia page has since been taken down, along with the old picture from 2015, but we have a screencap of the page if you are curious about what it originally read.
It says among other things, that a Tab S3 that they don’t know much about will be unveiled alongside (the already unveiled) Samsung Galaxy Note 7 in September.

Samsung’s national pages does sometimes list things that doesn’t appear later on. Two years ago that happened with Samsung Portugal too, who listed a “Samsung Galaxy Note 10.1 2015 Edition” randomly on its official pages. Problem was, there never was such a tablet.