Apple
Apple became the target of a long range of Apple Maps jokes on September 19, after they released iOS 6 and people started using then new in-house developed Apple Maps map and navigation feature. When you rank #1 for a problem as a trend on Twitter, and have a dedicate blooper page on Tumblr, you know you have a problem.

Amazon
September 6 was Amazon’s big day. Amazon unveiled not only a new Kindle Fire 2, but also a Kindle Fire HD 7, Kindle Fire HD 8.9 and 8.9 4G LTE, and two new ereaders: the front-lit Kindle Paperwhite, and the new Kindle, which now costs as little as $69.

Microsoft
Microsoft workers got a little bonus on September 13, when Steve Ballmer announced that all of the 94,000 Microsoft employees would be getting the new Microsoft Surface RT tablet, a PC with Windows, and a Windows Phone 8 too for both home and work.

iPad Mini
Pictures of the upcoming new iPad Mini tablet may have been leaked, though there is no way to authenticate those claims yet.
We will know in a few weeks time if those pictures were real.

Samsung
Samsung announced on September 18 that they have started mass producing a industry-first two gigabyte low power double-data-rate 3 (LPDDR3) memory, with 30 nanometer class technology, for their next mobile devices such as tablet computers and smartphones.

Samsung also announced on September 25th that they are teaming up with Attano, India’s first eBook store and a large marketplace for Interactive Educational eBooks. Attano partnered with Samsung to launch “My Education” on a range of Samsung phones and tablets. Attano’s “My Education” is catering to the needs of students from Kindergarten up to Post Graduation through their collection of Interactive Educational eBooks, Tests, Free Learning Videos and Education News.
Good news for both, since Samsung have a 25% market share of the Indian tablet market.

Toyota
A robot with a tablet computer on its head was unveiled by Toyota Motor Corporation on September 21.
The home-living-assistance robot prototype categorised as a human support robot (HSR), is there to assist people with limited arm or leg mobility. Toyota’s HSR robot acts both upon both voice commands and tablet controls.
Read more at Toyota. 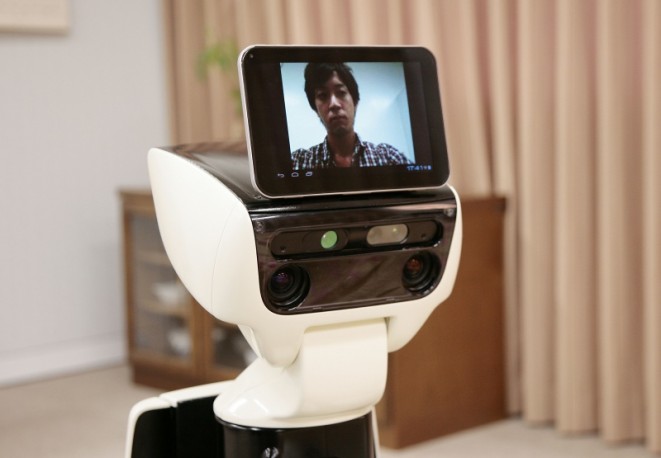 Toyota Robot with a tablet on its head

HTC
HTC started teasing their audience on September 18 through Facebook and Twitter by posting small portion of a picture of an unknown device, one day before a HTC press conference. It was revealed on September 19 however that the devices were HTC’s new Windows 8 phones 8X and 8S, and no further info was given concerning the prospects of new HTC tablets.

Google Nexus 7
Google Nexus 7 is rumored to become available with a 3G option from the middle of October. Apparently the 3G model is already in production at Asus factories.
On average, only about 1 out of 10 tablet users chose to buy a tablet with cellular connection. The rest of the users stick to Wi-Fi only, or use their smartphone as a way of tethering cellular connections.

Motorola
In other Google news, a Munich court ruled on September 13 that Google’s Motorola Mobility have to recall all the Android tablets and smartphones it has shipped in the Germany which infringe Apple’s “rubber band” scrolling patent.

Nook
And on the day before Amazon’s big unveiling event, another source reaffirmed a previous rumor, that Barnes & Noble’s new Nook that we excpect to see later this month, will have a stunning display with 243PPI as well as be very, very light. This has been heard before.
Then on September 26, Barnes & Noble launched NOOK HD and NOOK HD+, both tablets sporting high-resolution displays.

AMD
Do you want to run Android apps on your Windows PC? Thanks to AMD and BlueStacks you can do that now.

Sony
Sony announced on September 24 that it will launch a new line of small external batteries for tablets and smartphones. The highest capacity battery will have a performance of 7,000 mAh.
To be released in November.

Haswell Chip
Intel unveiled their new Haswell chip on September 11, which is another chip that will increase performance and lower power consumption.