Barnes & Noble launched its 9-inch Nook HD+ tablet with high-resolution display today (together with the 7″ Nook HD).
The Nook HD+ is an entirely new tablet launched by Barnes & Noble in the sense that they’ve never produced any larger tablets than 7-inchers before. It’s estimated that more than 10 million Nooks have been sold since launch of the first Nook a few years ago.

(UPDATE: The price has been cut to a mere $149 since this article was first published.)

The 9-inch Nook HD+ caught people by surprise, but impressed greatly with its combination of very good specs and very low price. So what are we looking at here?

Nook HD+ Highlights
Barnes & Noble seem to want to market the NOOK HD+ as the lightest, lowest-priced full HD tablet ever, all of which is true, so why not. 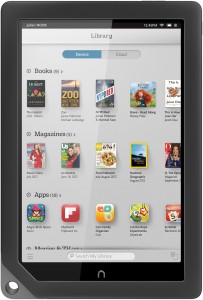 Display
The full HD 9-inch display has a 1920 x 1280 resolution with 256 PPI (pixels per inch) and 3:2 aspect ratio. Further, the display has been built to reduce glare and provide wide viewing angles. This is a smart move by B&N. A versatile and high-resolution display makes a tablet so much more flexible and enjoyable to use, which is how most people approach tablets anyway.

So for consuming media, playing games, browsing the web, reading, and looking at pictures, all while laying upside down on the couch, all becomes easier and better with this kind of display. Two people looking at things on the Nook HD+ together also becomes easier now with wide viewing angles. So these things matter.

Text becomes sharper too of course, which is a particularly welcome upgrade on a tablet, given the relatively small screen compared to larger computers.

Like the Nook HD, the HD+ also have a soft rubber back with terrific grip and bezel design that gives it a better grip when you hold it in your hand. The only complaints are the design, which with that hole on the left bottom corner of the tablet isn’t to everyones liking, and the lack of cameras.

vs Kindle Fire
The obvious competitor to Nook HD+ is the brand new Amazon Kindle Fire HD 8.9. But Nook HD+ beats the Kindle Fire HD 8.9 with slight margins.
Perhaps Amazon will cut their release date with a few weeks given its new competition now, but nothing has been heard yet. Even better, Amazon could remove of the ads on the Kindle Fire HD’s without the $15 fee.
A display comparison between the two tablets looks like this:

Another difference with the Nook HD+ is that it comes with a (free) AC wall adapter, unlike the Kindle Fire’s.

Nook HD+ is also light. At only 515 grams, it is the second lightest tablet of the same size. The lightest being the Samsung Galaxy 8.9 LTE, which only weighs 453 gram.

The 1.5GHz Texas Instruments OMAP 4470 makes it one of the fastest tablets for this kind of money and display size.

Features
While the Nook HD+ has some impressive specifications, that itself isn’t enough to move merchandise.
With tablets comes ecosystems these days or vice versa. Former Microsoft executive Stephen Elop described the situation by saying that: “battle of devices has become a war of ecosystems”.

And Barnes & Noble is obviously not immune to the pressure of that battle. Barnes & Noble’s ecosystem consists of two parts.
They have 40 million customers, a 27% eBook market share, they are the second-largest retailer of magazines in the US, with aproximatly 5,500 magazine titles and nearly 1,000 newspaper titles.

The other part of Barnes & Noble’s ecosystem is how this system integrates with the tablets, ereaders, and other devices people use to access B&N content. B&N launched the first Nook tablet (called NOOK Color) in October 2010, but they didn’t present a video-on-demand movie and TV-show service for Nook’s before now. Called NOOK Video, this is B&N’s attempt at closing the gap with it’s main rival, but it will still take a long time before they can catch up to Amazon. Though the UltraViolet feature does speed up things a bit. UltraViolet gives owners of DVD or Blu-ray that has UltraViolet codes, the chance to stream digital version of these movies they own too from a device like the Nook for instance, without the need for the physical version with them.

NOOK Video also works with NOOK Cloud which means that videos bought in the NOOK Store are stored in the NOOK Cloud, making the content available to TVs, smartphones and tablets through NOOK Video apps.

The Nook’s are however locked to Barnes and Noble’s small but growing appstore. So forget about accessing Google Play or Amazon Apps apps (unless you hack it) even if this is a Android tablet.

Other main features on the Nook HD and HD+ is the ‘Microsoft Mobile Email’ email program with Exchange ActiveSync support.

Many of you will also welcome NOOK Profiles, the personalization feature for up to six people, where profiles can be controlled by the Nook’s owner to control and limit which functions and scope of access each user will operate with. This is a neat feature that can ‘childproof’ a NOOK. But it also works by B&N supporting different recommandations (NOOK IQ Recommendations) sent to each individual user, based on that profiles user history and interest.

The NOOK Scrapbook feature is also neat. It quite simply works by giving you a scrapbook in which you can save pages from magazines and catalogs that you browse thorugh.

It will be exciting to see if Barnes & Noble will attract any new customers with the two Nook’s it unveiled today.
As media consumption tablets they are cheap and offer good value for money. But if this is enough to appeal to new customers to Barnes & Noble remains to be seen, even if the reception seems positive on first impression. As Microsoft develops their relationship with Barnes & Noble over the next year, many things could happen that could potentially make the Nook’s and the B&N ecosystem even more attractive. 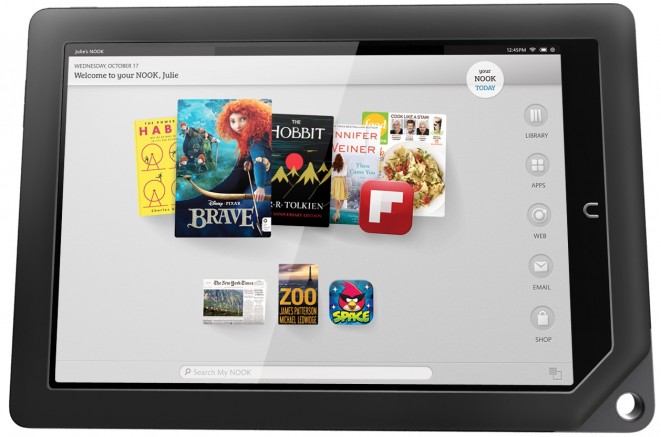