It has happened in the past that companies have certified their devices with a slightly different project name instead, but that does not appear to be the case with the new Tab S7 tablets.

The Tab S7 tablet that was certified, was the Samsung Galaxy Tab S7+ with the model number Samsung SM-T976B, which is believed to be the 5G model destined for Europe. It was registered with Bluetooth 5.0. 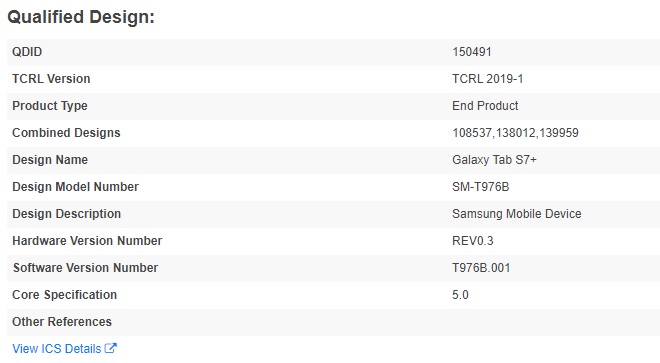 From firmware files that became available three weeks ago, we’ve also seen the existence of a SM-T976N model, which should be a 5G model for a different market. South Korea most likely.

Other confirmed specs so far based upon official records, includes dual-band Wi-Fi 5, Android 10, and a 9,800 mAh battery for the Samsung Galaxy Tab S7+.

A smaller 11-inch Samsung Galaxy Tab S7 will be launched alongside this tablet, and they are all expected to be available in Wi-Fi, 4G, and 5G model options.

The launch of the Samsung Galaxy Tab S7 tablets has been expected to take place in August for some time now. August 5 is also believed to be the date of the next Galaxy Unpacked 2020 event.