With a 10.6-inch screen, it is by far the most powerful tablet in the 10-inch category, and also the most comprehensive one. The Samsung Galaxy Book 10.6 is unique enough to start a new category, a solid notch above the category where the Surface 3 have been mostly on it’s own for 2 years.

As a 10-inch productivity tablet with Windows 10, keyboard, and a digitizer pen with accompanying features, it can mainly just be compared to the Full HD Surface 3 launched in 2015, and the HD Asus Transformer Mini launched in 2016. But with the Surface 3 being powered by an Intel Atom x7-Z8700 processor, and the Asus Transformer Mini powered by an Intel Atom x5-Z8350 processor, these two tablets are much slower than the new Samsung Galaxy Book 10.6.

Measured by the single-core Geekbench score, the 7th gen. Intel Core m3-7Y30 “Kaby Lake” powered Samsung Galaxy Book 10.6 is 160% faster than the Surface 3, and 175% faster than the Asus Transformer Mini. That’s a world of difference. And Samsung will remain safely in that top spot too, because all other 10-inch Windows 10 tablets in 2017 are powered by Intel Atom processors instead. So that’s one of the things that makes the Samsung Galaxy Book 10.6 very unique. 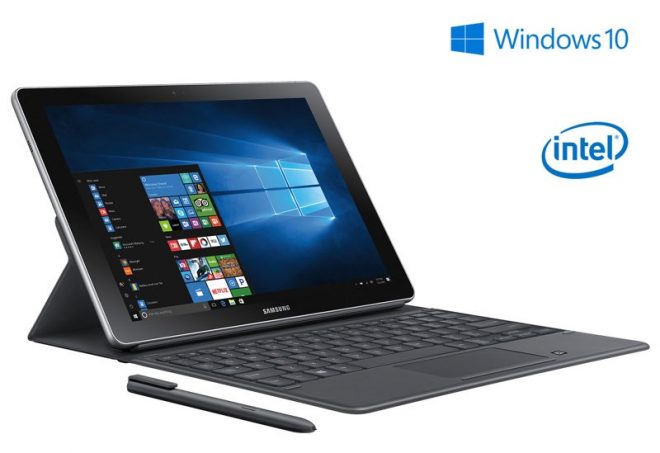 Another thing that makes the Samsung Galaxy Book 10.6 distinguish itself in the 10-inch category of productive 10-inch Windows 10 tablets, is the Full HD display with top of the line S Pen digitizer, or stylus as it is usually called now. The majority of the 10-inch Windows 10 2-in-1 tablets that have been available from the best known brands the last 2 years, have had HD displays, and usually not very good stylus support either, if any. The Chinese tablets in this category have often had Full HD displays, but their digitizer support have left a lot to be desired when it has been available.

So with the sharp and bright Full HD display of the Samsung Galaxy Book 10.6 with 1920 x 1280 resolution, and the accurate Galaxy Book S Pen with a massive 4096 pressure levels of sensitivity, Windows Ink support, and variable stroke thickness depending on the angle it is written with, Samsung have a tablet with the best and most functional display in this class too. And with the Galaxy Book S Pen you also get features like Samsung Notes and Air Command. 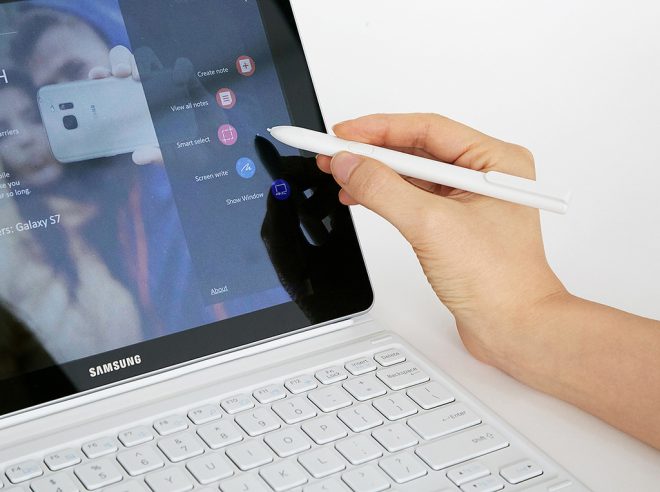 The pen is included, and so is the backlit keyboard of the Samsung Galaxy Book 10.6, with 3 brightness settings. The keyboard cover also has more than just the upright stand position, since it can be laid almost flat, but with a slight tilt up, if you want to focus on writing or drawing illustrations on the display.

It is also one of the few Windows 10 tablets to feature sensors like GPS and GLONASS. Other Galaxy Book 10.6 sensors includes accelerometer, hallsensor, and lightsensor. And it has a USB 3.1 Type-C port, another highlight.

The Galaxy Book 10.6 has 4GB of DDR3 RAM, and options of either 64GB or 128GB of eMMC storage, as well as support for microSD cards up to as much as 256GB of storage expansion.

Samsung doesn’t skimp on components on their top model tablets, so it has all the Wi-Fi bands and channels covered with 2.4 GHz and 5 GHz 802.11 a/b/g/n/ac 2×2 Wi-Fi with MIMO, Wi-Fi Direct, as well as Bluetooth 4.1 LE covered.

It has a 5MP front camera that can record Full HD 1920 x 1080 videos af 30fps. And of course the tablet itself can play 4K videos smoothly. Samsung Galaxy Book 10.6 also has stereo speakers and a 3.5 mm audio combo jack, and a 9 hour battery life from the 30.4W, 5000 mAh battery, which also supports fast charge.

Samsung Galaxy Book 10.6 have also been made with the Samsung Flow app in mind, which enables easy syncing between the phone and the tablet, the option of answering to text messages from the tablet, and so on, and the phone and tablet doesn’t even need a Wi-Fi network to stay connected to each other.

Is the Samsung Galaxy Book 10.6 the best Windows 10 tablet / 2-in-1 tablet in the 10-inch category in 2017? In my opinion, yes. The premium price comes from the Intel Core m3 “Kaby Lake” processor, good components, solid build quality, effective firmware, many features, and Samsung customer service.

With that in mind, we can say that the Samsung Galaxy Book 10.6 punches above its weight class. 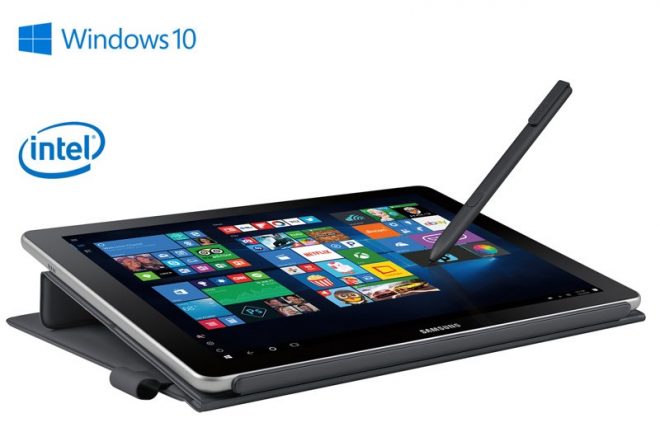 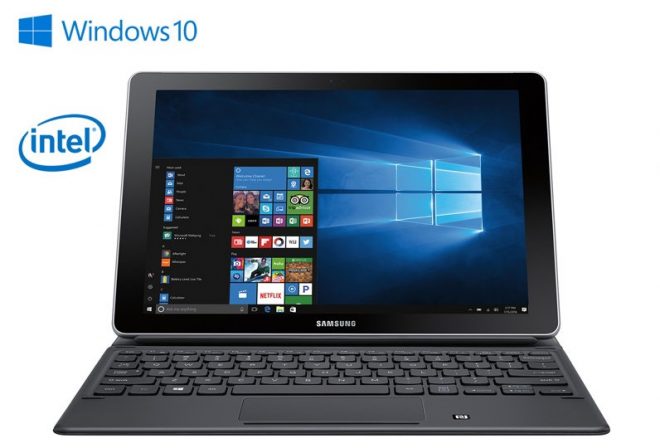 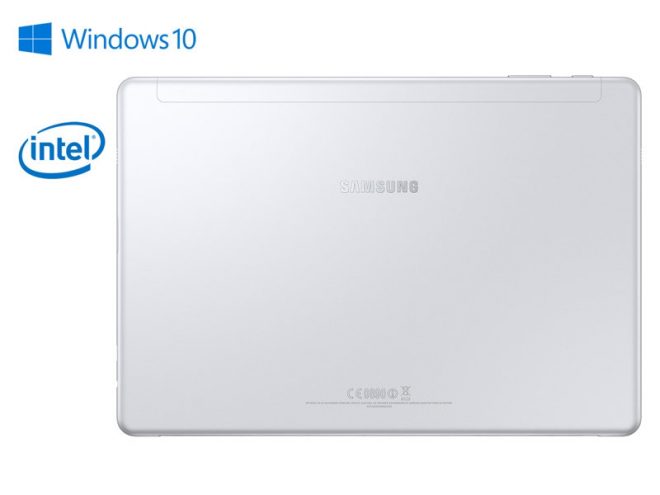 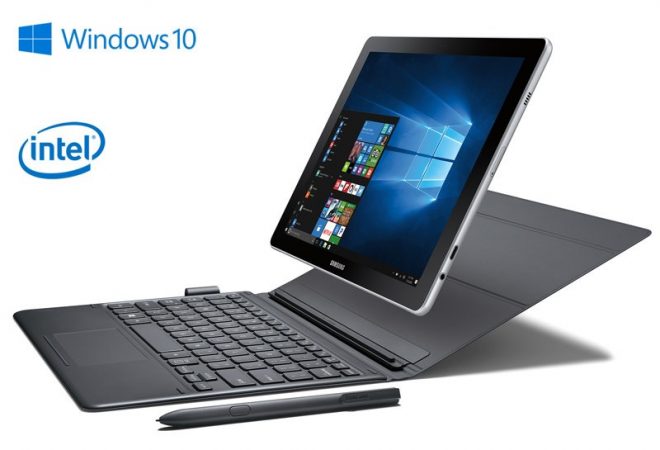 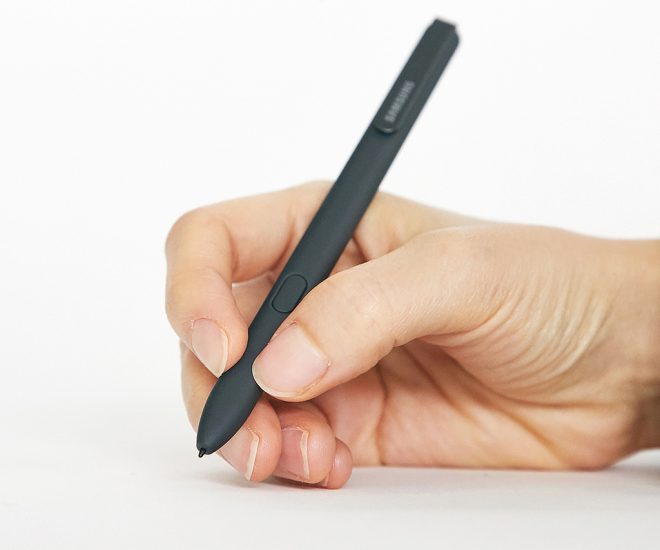