If you are thinking about a 7-inch budget Android tablet this week, think about the NOOK HD, which is on sale for a mere $109 this week.

Golly!
Yes, well to put things into perspective, when Barnes and Noble launched the NOOK HD tablet in September last year, it originally sold for $199. It was then cut to $129 during the summer, and now even further to only $109, but just for this week though.

Now, while I do view this as a strong indication of a set of new NOOK tablets being just weeks away, and that this sale of an outgoing NOOK is a clearing-out-sale, it’s still the best tablet value around as far as 7-inch Android tablets are concerned anyway. 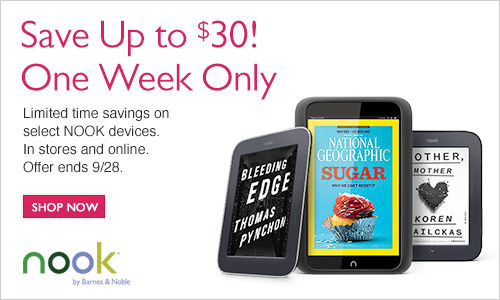 What customers get is a lightweight 8GB tablet (+ microSD slot) with a 1440×900 pixel resolution, which by the way puts Amazon’s upcoming October 2nd Kindle Fire HD 7 to shame. And just like the Kindle, it lacks cameras in the front and back. So this is a consume and play tablet, more than a productivity and explore tablet. And it does have Google Play access. But, just to be clear, it’s primarily this week’s low price that makes it attractive.

To see how this tablet ranks otherwise, go to the Compare Tablets page.