What was first announced by Barnes and Noble as a dirt cheap Father’s Day sale on NOOK HD and NOOK HD+ last week, have now been extended for an unknown period of time.

Barnes and Noble officially announced the continuation of the discount on both of these HD Android tablets after the deep price cut of last week seemed to boost sales quite a lot.

Commentators are split between those who think that B&N are having a sale to clear out inventory before new models arrive, and those who believe that B&N might discontinue the production of tablets and ereaders altogether. 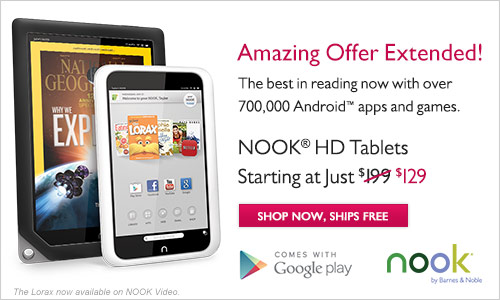 Another tablet on sale at the moment is Samsung Galaxy Tab 2 (10.1-Inch, Wi-Fi)

. But at least there is no confusion over motive with Samsung, since we know that they are clearing out inventory before the Galaxy Tab 3 is released in a matter of days.