The first FCC files for the upcoming new Intel Core i5 “Kaby Lake” powered Windows 10 2-in-1 tablet Samsung Galaxy Book (aka Samsung Galaxy TabPro S2) (SM-W720, SM-W723, SM-W727, SM-W728) were published today, revealing most of the specs and features, adding to the list of official specs that had already been leaked by now.

First of all the Samsung Galaxy Book (previously known as Samsung Galaxy TabPro S2) has grown from a 12-inch Windows tablet in 2016 to a 12.4-inch Windows tablet in 2017. The 2016 model has a 11.956-inch display, while the new model has stretched out the display up to a larger 12.4-inch display. At least that’s what the FCC documents specifies, but it’s up to Samsung how they want to market this.

So that’s on the inside, but on the outside, the tablet has been made smaller, which means that we should see smaller bezels on the new Samsung Galaxy Book when it is unveiled later this month. 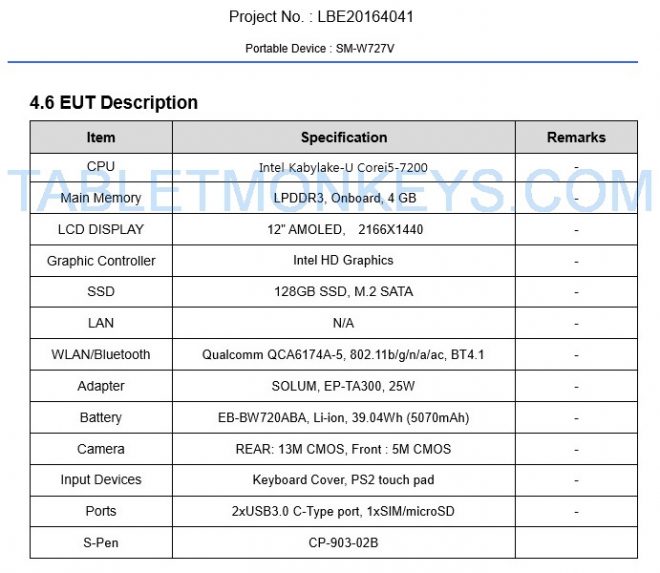 The new Samsung Galaxy TabPro S2 is 2,8 mm shorter, with a new length of 28.75 cm, and 2,8 mm more narrow, with a new width of 19.6 cm. The 2016 model is just 6.3 mm thick, so it will be fun to see if Samsung has managed to make it thinner in the process too. But everything points to Samsung having created a legacy device that has continued to develop as the most mobile large Windows 10 tablet that is still a very powerful device.

(UPDATE: An optional Samsung Galaxy TabPro S2 with 8GB RAM can be confirmed too.)

The Samsung Galaxy TabPro S2 is expected to be unveiled at the start of the Mobile World Congress in Barcelona on February 26, when Samsung has announced a press conference for Samsung Galaxy devices.

Prices, launch dates, what the differences will be between all the different versions, and everything else we still need to find out about the TabPro S2 should be announced then.

So far there has only been one sketch leaked through the FCC documents, for one of the Verizon destined SM-W727V versions, along with an image of what may be the 2016 model used in one of the illustrations used to show how the tablet was set up in one of the tests. 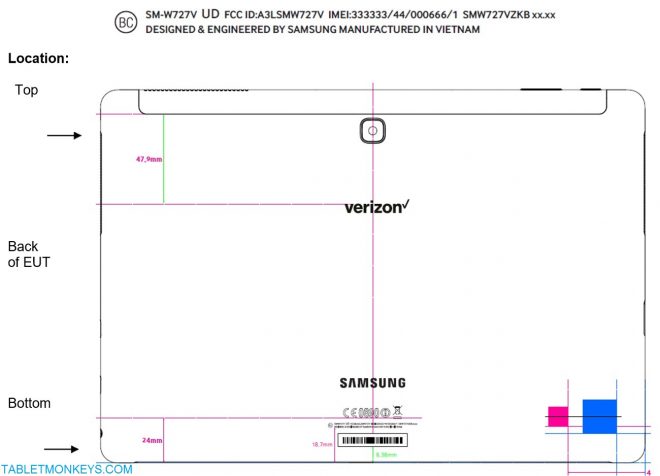