Microsoft announced seven new computer products during the October event in New York today, including of course two new Surface tablets, and even two previews of upcoming Surface devices due next year in Q4 2020. Some of the new Surface devices will start taking pre-orders today.

Surface Pro 7
The well matured Surface Pro is now properly powerful and is ensured to stay ahead of its rivals for a long time since it’s equipped with 10th gen. Intel Core processors.

And while it has mainly stayed the same as before, the SP7 has been given both the USB C and USB Aports that both parts of the fanbase as well as tech writers have complained about the lack of for the last 2 years.

The price of the new Surface Pro 7 starts at $749 and it will launch on October 22.
https://www.microsoft.com/en-us/p/surface-pro-7/ 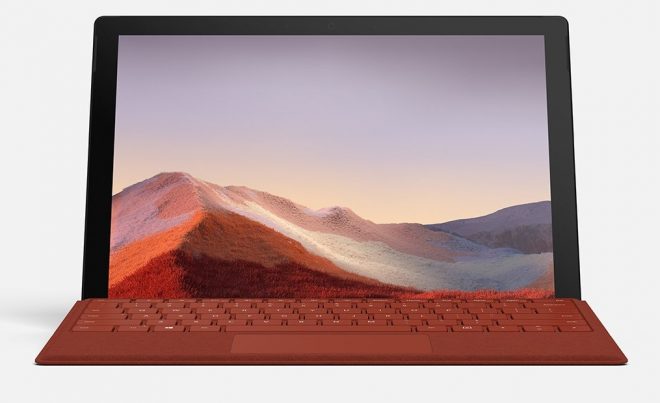 Surface Pro X
The Microsoft Surface Pro X is the newcomer and a device that’s going head to head against the Apple iPad Pro 12.9.

It has a 13-inch PixelSense Display with 2880 x 1920 resolution, and it’s powered by a custom design SQ1 processor codeveloped together with Qualcomm, and it can run 2 teraflops of graphics processing which bodes well for both performance and battery life at the same time.

The Surface Pro X is the tablet that’s been given the new wirelessly charging Surface pen too, call Microsoft Surface Slim Pen, and it nestles into the top of the Surface Pro X Signature Keyboard where it will always be charged, which is pretty much a perfect location for this pen too.

Despite its 13 inches, it’s still no wider than the Surface Pro since the bezels are thinner.

It will be released in November for $999.
https://www.microsoft.com/en-us/p/new-surface-pro-x/ 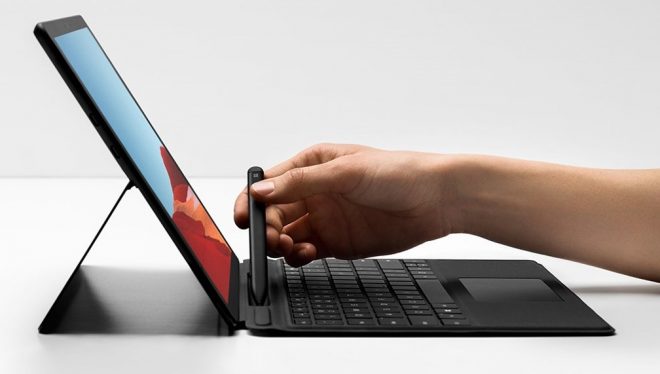 Surface Laptop 3
Now in both 13.5-inch and a new 15-inch iteration, with 10th gen. Intel Core processor choices on the 13-inch and AMD Ryzen Surface Edition processor on the 15-inch model. That’s a AMD Ryzen 5 3580U Mobile CPU combined with Radeon Vega 9 GPU.

Other changes includes subtle and practical design changes, a 20% larger preciscion trackpad, and a somewhat modular design in that it’s servicable and repairable, as well as upgradeable.

Surface Laptop 3 has also been given fast charge that can charge 80% in one hour, as well as new color options, improved front cameras, OmniSonic speakers, very clear dual far-field studio mics so you can dictate and communicate with digital assistants and speech-to-text apps.

The new Surface Laptop 3 will be released on October 22 for $999 and $1199 respectively, and it’s definitely a laptop to check out if you need a clever new laptop the next couple of quarters:
https://www.amazon.com/New-Microsoft-Surface-Laptop-Touch-Screen/dp/B07YNK3R68/

Surface Earbuds
The Surface Earbuds are new and compliments the Surface Headphones. They feature Omnisonic sound and the type of touch gesture app control that we’ve come to expect from headphones and earbuds, and even voice controlled access to apps like Outlook and PowerPoint.

The Surface Earbuds comes with a charging case and will launch for $249.

Surface Neo
One of the two biggest surprises was the preview of two devices that Microsoft says it intends to launch October/November 2020.

The first one was the Surface Neo, a foldable Windows tablet or dual-screen tablet at 13 inches that splits into two 9-inch screens.

The dual-screen Surface Neo is powered by a Intel Lakefield processor, has a very thin LCD display protected by Gorilla Glass, and a detachable magnetic keyboard that connects through Bluetooth.

And with the Surface Neo we also got the first glimpse of the Windows 10 for dual-screen devices that Microsoft is developing, called Windows 10 X.

Surface Neo with Windows 10 X works so that for instance sliding the physical keyboard up or down on the display, will leave the remaining unused display surface as trackpad or as a mini-app window called Wonderbar.

Other features includes seamless span of one app on one display into dual-screen mode simply by drag-and-drop to the middle between the two screens. It seems very intuitive to use.

In addition toe being very thin, it also weighs just 651 grams at this point, though a few tweaks here and there should be expected, and product chief Panos Panay invites developers to throw themselves over it. 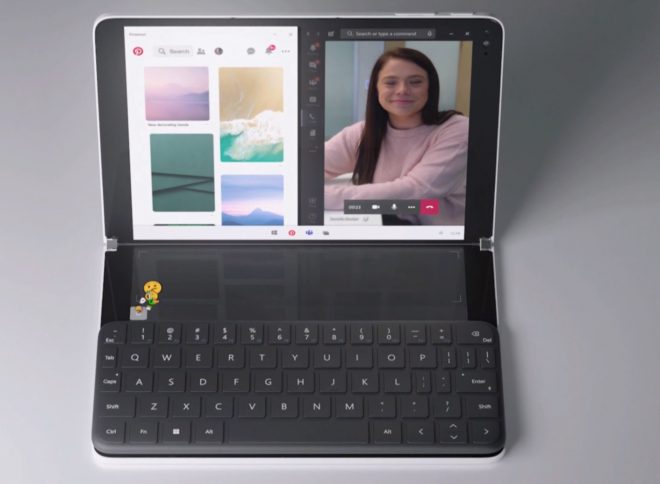 Surface Duo
And finally Microsoft gave a preview of the other dual-screen Surface, the Surface Duo phone, another in-development product that Microsoft wants to launch in Q4 2020.

The Surface Duo phone is an Android phone, and Microsoft is working with Google on the software for this dual-screen phone, since they gave up the Windows Phone OS after they found it difficult to get enough developers to get behind it. 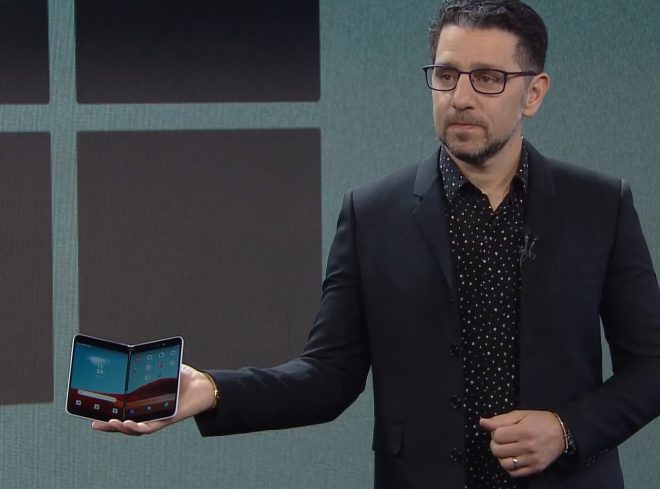