The new iPad Pro 2018-2019 model replaces the the Apple iPad Pro 12.9 II that was launched on June 5 last year, and the upgrades are significant.

With a redesigned casing, the new iPad Pro 12.9 III is much smaller than before while retaining the 12.9-inch screen, but with the new near border design, this iPad now features round display corners but with the same 2732 x 2048 resolution and 600 nits brightness. The Touch ID fingerprint reader have been swapped for a Face ID facial recognition login, and the edges have become square. But despite all of this, it is now even thinner too, with a thickness of 5.9mm. The weight is low, at 631 grams for the Wi-Fi model, and 633 grams for the 4G LTE model.

Apple iPad Pro 12.9 III is powered by the very powerful Apple A12X Bionic chipset with an octa-core CPU, hepta-core GPU, which makes it fast, powerful, and capable of powering 5K external monitors, and with its neural engine run the most advanced augmented reality technologies that are coming ahead of us. It ships with the latest iOS 12.1.

iPad Pro 12.9 has 4 speakers with higher output and a new woofer, 3 mics, and Apple finally ditched the Lightning port in favor of a industry standard USB Type-C port. This USB C port can be used both to connect all sorts of USB devices, charge the iPad, and even be used to charge other devices from.

Apple also unveiled the new 2nd generation Apple Pencil today, which attaches magnetically, automatically pairs to the iPad Pros and charges wirelessly. Simply double tapping the side of the Apple Pencil will activate and swap between features, and for some apps the gestures are customizable.

It has a 12MP rear camera with 4K video recording at up to 60 fps, and a 4-LED True Tone flash, while on the front it has a 7MP camera.

The iPad Pro 12.9 III battery is a 36.71 Whr battery with a 10 hour battery life. Included with this iPad is a USB-C cable and the new 18W USB charger / power adapter. 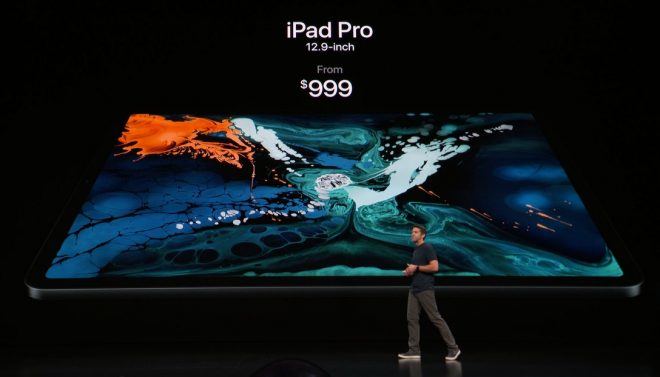