Lenovo officially announced their new Lenovo Yoga Tab 3 Pro on September 2, a new version of the 10.1-inch Android 5.1 tablet with built-in projector. It will launch in the US in November for a price of $499 for the Wi-Fi model: http://www.amazon.com/Lenovo-Yoga-Tablet-Pro-MultiTouch/

Lenovo has built this as a multimedia tablet before anything else, based on Lenovo’s feedback and research which showed them that people use the Yoga tablets in particular to consume videos. So with that in mind they focused on a good screen, a projector, and one of the best audio systems ever on a tablet. This spilled over to the feature side too where Lenovo cooperated with Netflix, so that a Netflix app is present on the home screen ready to offer personalized recommendations.

The 10.1-inch screen has a QHD resolution of 2560 x 1600, giving it 299 ppi and a 16:10 aspect ratio. The display is a wide-angle IPS panel with 10-point multitouch support, which is splash proof even. We don’t know what the resolution of the projector is yet, Lenovo only says it’s very bright. It is a DLP projector, so it will offer at least FHD. The tablet also has 4 front JBL speakers with virtualized Dolby Atmos and Dolby Digital Plus sound technology, which gives users the feeling of surround sound. It also has a 5MP front camera, and a 13MP rear camera with auto focus. 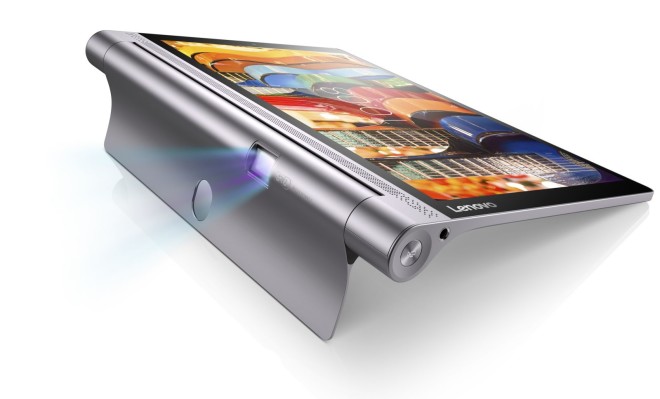 These are already impressive specs but most of the other specs are good too. It has Android 5.1 Lollipop, an Intel Atom x5-Z8500 processor, 2GB of LPDDR3 RAM, and 16GB or 32GB eMMC storage options with 128GB support for microSD cards.

The 4G LTE will not be available in the US, so Internet connectivity will come through the dual-band 802.11 a/b/g/n/ac with MIMO and Bluetooth 4.0 instead.

The weight is 665 grams, so it is naturally a little fatter than the average 10.1-inch Android tablets, but that’s because of the built-in kickstand, battery cylinder, the 4 speakers, and the projector. But since the Yoga tablets are said by Lenovo to be used with their kickstand and placed on a desk, tablet, or hung on a wall, the little extra weight doesn’t appear to be an issue among the many users.

There’s a brief video of the live announcement below together with the commercials for the Lenovo Yoga Tab 3 Pro. 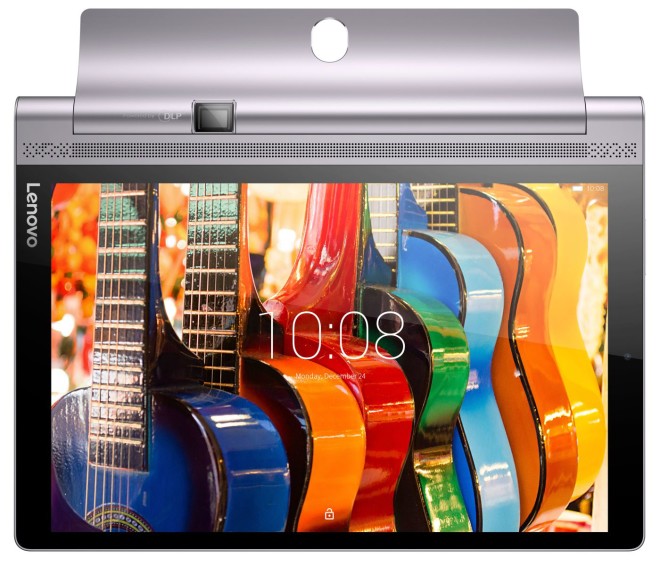