With Lenovo’s official announcement of the Lenovo Yoga Tab 3 8 with Android at IFA 2015, they also followed up with a launch date for the new Yoga tablet. It will be released next month already, with an official release date of October 1 in the US, where the price for this tablet is set to just $169, which is pretty great. That’s $30 less than the Lenovo Yoga Tab 3 10.1 that will be released exactly one month later:
http://www.amazon.com/Lenovo-YOGA-Tablet-ZA090011-Computer/

With such a low price this falls into the category of 8-inch budget tablets with Android 5.1, where its main rival is basically just the Lenovo TAB 2 A8 and Asus ZenPad 8.0 (Z380C) neither of which have the technology of the Lenovo Yoga Tab 3 8. So that’s interesting.

It has the same features as those on the Lenovo Yoga Tab 3 10.1, meaning a 8MP rotating camera that can be used as either a camera on the front or on the rear of the tablet, and it has gesture control which lets you use your hands in the air without touching the display to activate an app or an action within an app. These are the first tablets with rotating cameras, which is a very good idea. The revolving camera clicks into each new position, so it will stay steady in whatever position you move it into. 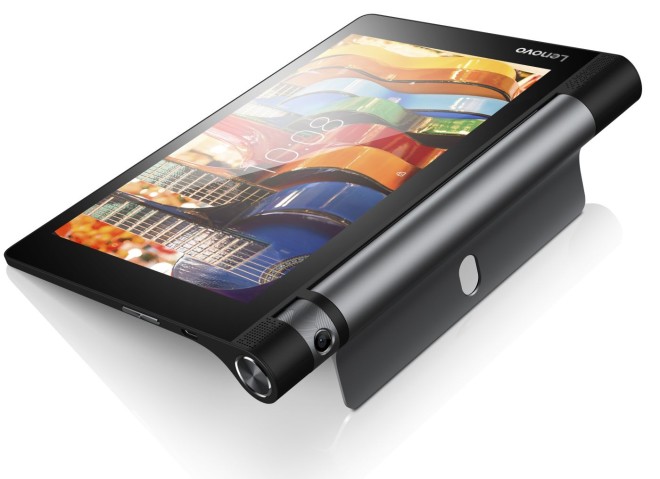 The display also has AnyPen support, which lets users use any conductive material as a digitizer, whether it’s a screwdriver or spoon. And it has a more than adequate battery life of 20 hours, the longest battery life you can get on a tablet. So no complaints there. The actual capacity is 6200 mAh, which even gives it a standby time of 95 days!

As for the rest of the hardware, Lenovo Yoga Tab 3 8 with Android 5.1 is powered by a quad-core 1.3 GHz Qualcomm Snapdragon 212 processor, has 1GB of RAM, and 16GB of storage with support for microSD cards up to 128GB.

The weight of all of this is 466 grams for the Wi-Fi model, and 472 grams for the 4G LTE model, though the cellular version won’t be launched in the US.

As an 8-inch Android budget tablet, this is a goodie, so it will be interesting to see if this tablet will be used as a stocking filler for Christmas. At least the price point makes it a viable second tablet for a lot of people. 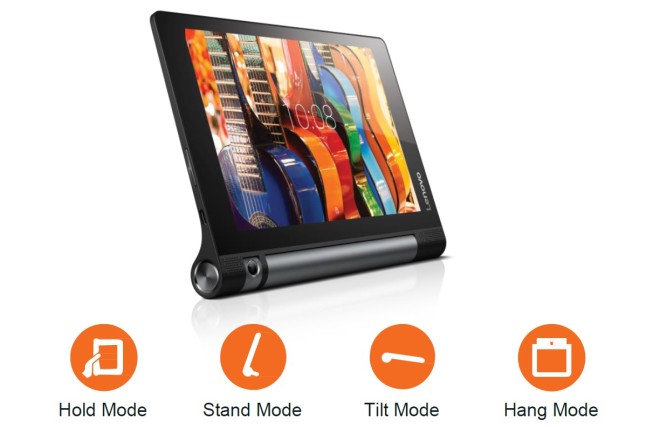