Kobo has not given up the tablet and ereader battle against the likes of Amazon. Oh no! An unveiling in New York on Tuesday saw an impressive lineup of 3 new tablets, a new ereader, and more applications and content brought to Kobo, making these products something worth checking out.

Kobo’s slogan is “Reading first,” meaning that reading is what is at the center of the tablet and eReader experience for Kobo. Michael Serbinis, CEO of Kobo elaborates by adding that: “Kobo remains focused on Reading; a time-honoured passion that keeps people informed, lets them escape, learn about new cultures, see things from a new perspective, travel back in time, and imagine new worlds. With magazines joining our eBookstore, a new kids experience, and the best eReading devices possible, we will help Readers find more of what they love – taking them beyond the book.”

(See all on Kobo.com

Kobo Arc 10HD
This is Kobo’s first 10.1-inch tablet.
Running Android 4.2, but with the Kobo skin of course, it’s powered by a 1.8GHz Tegra 4 processor, and have 2GB of RAM. So that alone puts the new 10.1-inch Galaxy Tab 3 to shame. But then things get really interesting, since Kobo just as well went for a whopping 2560×1600 high-resolution display for their first 10.1-inch Android tablet.

Other goodies are a 1.3 MP front-camera, and dual stereo speakers. Further specs are dual band Wi-Fi 802.11, Bluetooth 4.0, Micro-USB, Micro-HDMI, and Miracast connectivity support for Wi Fi media streaming.
Most outstanding feature would be the Reading Mode, where Kobo claims that the the battery life is extended from 9.5 hours to more than 10 days!

Battery life for the Kobo Arc 7HD is set to up to 8 hours.
This tablet too will be available in black, for $199.99 for the 16GB model, and and $249.99 for the 32GB model. The current release date is October 16 for this tablet as well. At $30 bucks less than Nexus 7 FHD, but with the same resolution, this is an interesting tablet for those who are not going to use it for extreme gaming.

Kobo Arc 7
Kobo is also throwing themselves on the budget tablet bandwagon.
So now, there’s a new 7-inch Kobo in town. Another Android 4.2 tablet with a run of the mill 1024X600 display, but an okay 1.2GHz Mediatek MTK 8125 processor and 1GB of RAM. 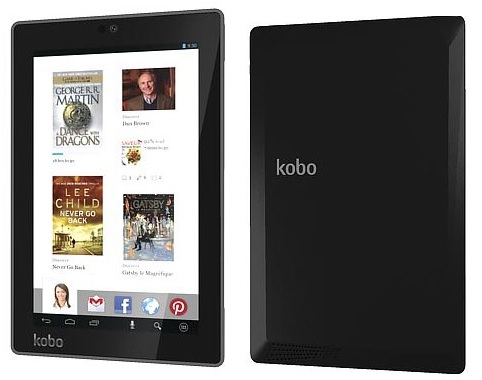 Specs include 4GB of storage, but with microSD card support up to 32GB.
The battery life is set to up to two months. Color options are black and pink, with the a pre-order price of $149.99.

Kobo is big in Canada. So big, that they had in fact twice the market share that Amazon had on eReaders last year.
Now, what does Amazon and Barnes and Noble have up its sleeve?