Huawei MediaPad M2 10 is Huawei’s newest 10.1-inch Android tablet for 2016, and will launch in Q1, starting at around $349. Huawei has said that the prices are not final yet, and may change upon US launch. But at least Huawei says that it intends to launch this tablet in the US, which have not always been the case with some of their better tablets in the past. So that’s great news.

The specification are interesting, but mixed compared to the regular tablet specifications we are accustomed to on tablets. But it’s definitely a tablet worth checking out if you are in the market for a 10-inch Android tablet in 2016.

The 10.1-inch screen has Full HD 1920 x 1200 resolution and IPS panel, and it has full digitizer support for the M-Pen which has 2048 pressure levels. Further down on the front of the panel is the home button with built-in fingerprint recognition with gesture control. 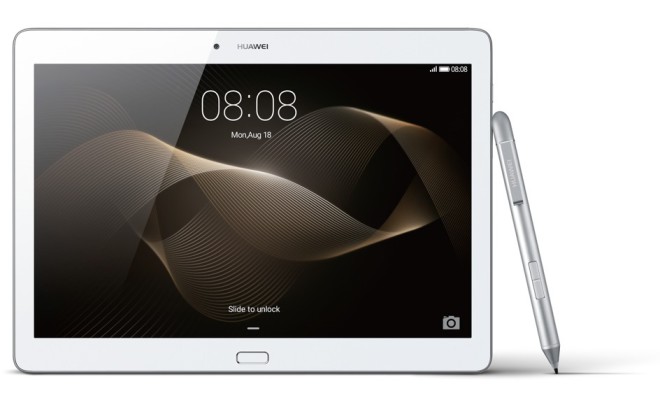 Huawei went with the octa-core processor Hisilicon Kirin 930 on this tablet, a processor brand Huawei often go with, and this particular processor operates at frequencies of quad-core 2.0GHz + quad-core 1.5GHz.

It will launch with Android 5.1, but also Huawei’s EMUI3.1 skin on top.

Huawei MediaPad M2 10 has high specs otherwise. This ranges from 4 Harman/Kardon speakers, with 2 for bass and 2 for treble, a 5MP front camera, and a 13MP rear camera with LED flash, and then dual-band Wi-Fi, optional 4G LTE, a 6660mAh battery, and additional sensors like ambient light sensor, accelerometer, gyroscope, hall sensor, and compass.

Huawei’s newest tablet comes wrapped in metallic moonlight silver or luxurious gold, and is light and thin too, with a thickness of 7.35 mm, and a weight of approximately 500 grams.

It’s a kind of powerful Android tablet this, and that makes it attractive, especially since it has premium specs in almost all other areas too.

But even if this tablet has Full HD resolution, this will not be high enough of a resolution for everyone. Fortunately there’s an option for those who want a higher resolution display, and that’s with the Sony Xperia Z4 Tablet which has 2560 x 1600 resolution, 3GB of RAM, and even Android 6.0 in an update to come pretty soon.