The iPad 10.2 was the first iPad to launch with iPadOS right out of the box, so that also meant mouse support. Yet neither of these keyboards were launched with a trackpad/touchpad on them.

Then in late September the Sentis Libra crowdfunding campaign was launched for what could be the first dedicated iPad keyboard with trackpad/touchpad. 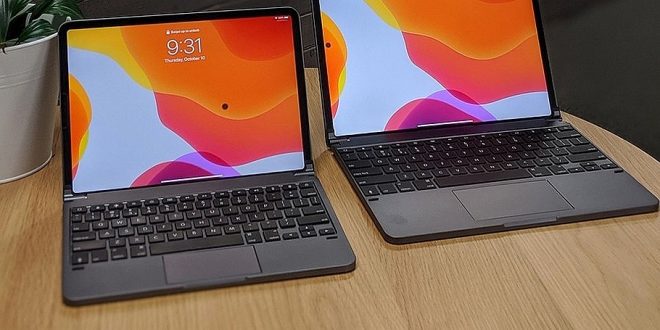 Well, that will be up in the air as Brydge have filed a patent infringement lawsuit against Sentis (as well as Kickstarter) claiming that Brydge has patents for this keyboard technology and the Sentis had not been authorized to use it.

In that process Brydge also had to reveal that it had been working on two iPad keyboards with trackpad/touchpad called Brydge Pro+.

Brydge Pro+ are keyboards for the iPad Pro 11 and iPad Pro 12.9 that Brydge says it has been developing since spring 2019. These iPad Pro keyboards are to be announced in the coming weeks.

Launch of the Brydge Pro+ keyboards are estimated to around the middle of Q1 2010, which is the same timeframe Sentis have set for the launch of their iPad Pro keyboards.