Ever since 2015 it has been speculated that Android 6.0 would roll out even to the original 8.4-inch and 10.5-inch Samsung Galaxy Tab S. Occasionally some tech writers have picked up tweets from national Samsung accounts on Twitter where customers have asked if the Android 6.0 would roll out to the Samsung Galaxy Tab S, and where the negative answer provided by the Twitter account representatives were taken as official statements from within Samsung.

We have never reprinted such tweets because it is too superficial reporting. And the proof is in the update over the last 48 hours, where Samsung Germany have indeed rolled out an Android 6.0 update for both the 8.4-inch and 10.5-inch Samsung Galaxy Tab S 4G LTE versions (SM-T705 and SM-T805).

These news were first caught by Samsung fansites AllAboutSamsung and Sammobile.

Both tablets were originally launched with Android 4.4, but have been updated to Android 5.0 Lollipop since, and now Android 6.0 starting in Germany, at least for the 4G LTE tablets. But there is a hardware difference between the Wi-Fi models and the 4G LTE cellular models, since the Wi-Fi models are powered by a Samsung octa-core processor, while the LTE models are powered by a quad-core Qualcomm Snapdragon 800 processor.

So when and if the Wi-Fi models will get the Android 6.0 update too, and in what other parts of the world, is still unknown. 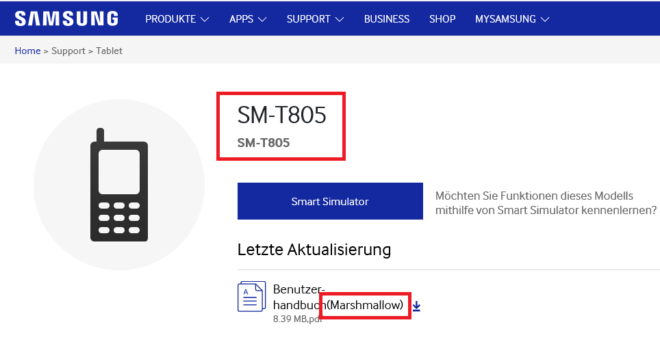 Screencap of SM-T805 on Samsung Germany