The question now is what the Samsung Galaxy Tab S Super AMOLED tablets offer over their regular LCD counterparts, and if you should pay the small premium price for a premium device.

(UPDATED: The Android 6.0 update started rolling out in August 2016 for the 4G versions and September 2016 for the Wi-Fi versions.)

and will be released on June 26. 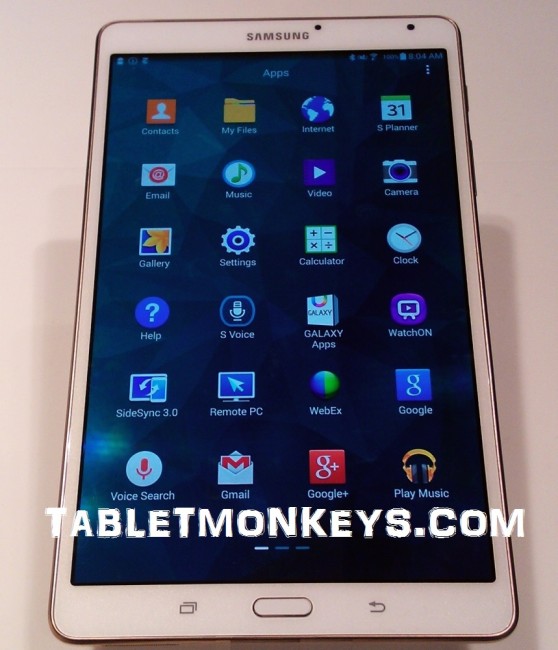 The Samsung Galaxy TabPRO tablets together with the Galaxy NotePRO were already the best Samsung had to offer, with their 2560 x 1600 resolution, Samsung’s octa-core processor for Wi-Fi models and 2.3GHz Qualcomm Snapdragon 800 processors on 4G LTE models, 3GB of RAM, multitasking, and a long, long list of features and content.

I was already satisfied by the great display of the Samsung Galaxy TabPRO, so to see Samsung create an even better display than that is impressive. The Samsung Galaxy Tab S are the best Android tablets available at the time of the writing, so with these top-end tablets, what exactly is Samsung offering here over their other high-end tablets?

It’s basically down to all the advantages of the Super AMOLED display technology, together with all the additional new tablet features, and finally the new collaborations Samsung have undertaken with media companies to bundle in tailor-made premium content that makes for engaging media consumption. 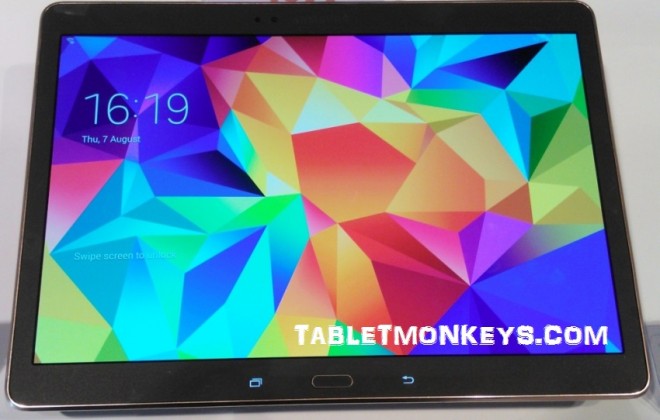 The Super AMOLED Display
What Samsung have cleverly done by reintroducing Super AMOLED display on these tablets, is using the dynamism that the technology offers. So the Super AMOLED technology offers there’s more than just vivid colors, or as some were worried, colors that simply had to much saturation too them without offering any real world usability or even losing their real color accuracy.

Fortunately that’s not the case, since Samsung is more professional than that. What these AMOLED displays offers over the already great conventional TabPRO LCD displays, are a 100,000:1 contrast ratio, so we get sharper contrasts that give more depth and dimension to whatever is being viewed on the screen. This is noticable. Now, when that is coupled with an even greater feeling of great color variation, it makes something like photographs in particular come more alive. A deeper black and brighter white is something that all tablet manufactures want in their tablet, and that’s what we are seriously getting here.

And then this hardware is made useful by an extensive range of choices of both automatic and manual adjustments and settings that makes the Super AMOLED display adjust and adapt according to whatever we want, which could be changing environments, changing preferences, changing needs, or particular purposes.

This is the technology known as Adaptive Display, so you can create a viewing experience that is just the way you want it to be. And if you set it do adjust automatically, parameters like contrast and sharpness, gamma, and saturation, will adapt to the environment you are in. As an example, it will even apply different adjustments to different parts of the screen and what is being viewed, to optimize the visual perception of what we are seeing. Great in all kinds of situations, especially if multitasking with very different content in those windows, for instance, black and white text or email in one window, and a browser or photographs in another windows.

Two of the main settings options are called AMOLED Cinema and AMOLED Photo, and will adapt to the content on the one hand and the environment we are viewing it on the other.

Samsung really get’s it, and that’s something to appreciate. The only other tablet brand I think have the same seriousness about displays are Sony, but despite their understanding of these matters, they haven’t got a tablet with displays that are as great as Samsung’s displays are. 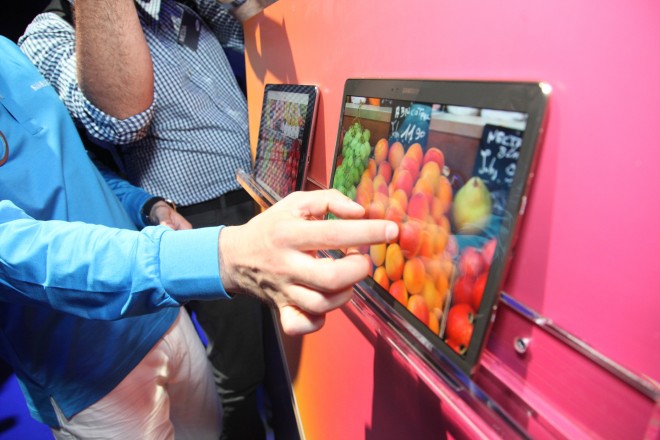 Another thing about Super AMOLED screens is that they have a little less glare and reflection than LCD displays. I know some of you have Samsung cameras with AMOLED displays, so if you want to see this for yourself, you can compare the LCD display of your smartphone to that of the AMOLED display of your camera and you should be able to see a difference. But it’s not glare free of course, only slightly better.

The first new feature is Papergarden, which is a content viewer and holder for magazines. And to make something out of it, Samsung went into collaboration with several leading media companies like National Geographic, Conde Nast (Vogue, Architectural Digest, Bon Appétit, Brides, Condé Nast Traveler, Epicurious, Glamour, Golf Digest, Golf World, GQ, Lucky, The New Yorker, W, Wired, Elle, Elle Décor, HGTV Magazine, and more.), and Marvel (which includes 15,000 Marvel Comics through 3 months of unlimited free membership). Papergarden can make certain parts of magazines become interactive, or you can watch how a golf swing is executed in a golf magazine, by playing one of the videos in that article.

On the same page there is also “Kindle for Samsung” which gives customer a free book every month through Samsung Book Deals. And somewhat related, it has high definition Netflix included too.

Fingerprint Sensor
A couple of features have been carried over from the Galaxy S5 phone, and these are the fingerprint sensor, Ultra-Power Saving Mode, Private Mode, and Kids Mode.

Galaxy Tab S is Samsung’s first tablet with a fingerprint scanner, which is embedded in the physical home button.
Through this security feature you can use Fingerprint Unlock, PayPal Payments, Private Folder, Samsung Apps login, and you can use it together with Multi User Mode so that a fingerprint will switch to the user profile on the tablet to that of the particular user.

SideSync 3.0.
With this feature, we can make and receive calls and messages directly from a phone on the Galaxy Tab S, so now we can leave the phone in another room for instance.

Multitask
The ability to multitask with 4 windows at once is called Multi Window and was introduced on the Galaxy TabPRO line.

SideSync
This is a way to drag and drop files from your phone to your Galaxy Tab S, or vice versa.

Kids Mode and Multi User Mode
This is a feature that begins with the fingerprint login, that offers many customizable settings and individual privacy features for sharing the use of the tablet.

WatchON
This is similar to what Sony has had for a while, where users can access the program guide directly from the tablet or use it as a remote control.

Accessories
Samsung have made three particular accessories for the Samsung Galaxy Tab S that can be very useful.

Galaxy Tab S Book Cover
Samsung developed what they call ‘Simple Clicker’ which are two buttons that connects the Book Cover to the tablet, through the two craters on the back of the tablet. It has a matte finish with stitches, and offers three different viewing angles in addition to protecting the tablet when closed. It has magnetic power on/off that automatically turns the tablet on and off with the open and close of the cover. The colors are white, bronze, red, blue, black, and ivory.

Samsung Bluetooth Keyboard
Well they thought this one through. Just look at those colors.
The Bluetooth keyboard is an extension of the tablet, built with the same materials, design, and colors – so the keyboard comes in two color options, which are the same Titanium Bronze and Dazzling White colors as the tablet.
Among other things, it has hot keys to features like Multi Window, S Finder and Screen Capture, a Bluetooth Pairing Button, a clip hinge, 80/81 Keys (Scissor Type), and a rechargeable (200mAh) Lithium-polymer battery. The weight is 340 gram.

Now what is the conclusions for the new best Android tablet Samsung Galaxy Tab S? These are the best two Android tablets to date, there’s no question in my book about that. The hardware speaks for itself, and the features makes it useful, while I see the premium content more as a bonus. The only question is really if it’s worth the extra money over the $70-$100 cheaper TabPRO versions?

If money is no object then the answer is obvious. But for everyone else, it is a question.

I figured that we don’t actually have to have a AMOLED display, but since an AMOLED display is better in every way over conventional LCD displays, and since every use of the tablet begins and ends on the display, having that luxury of always being able to get a better visual experience than one otherwise would have had on an LCD version, might be worth investing in.

Of course, these are also the lightest and thinnest tablets that are available today, and they even have the added exclusivity of gold coloring on the sides to make them stand out. So for those who are looking for the best Android tablets with a touch of exclusivity, there’s no doubt that these are the best tablets money can buy. 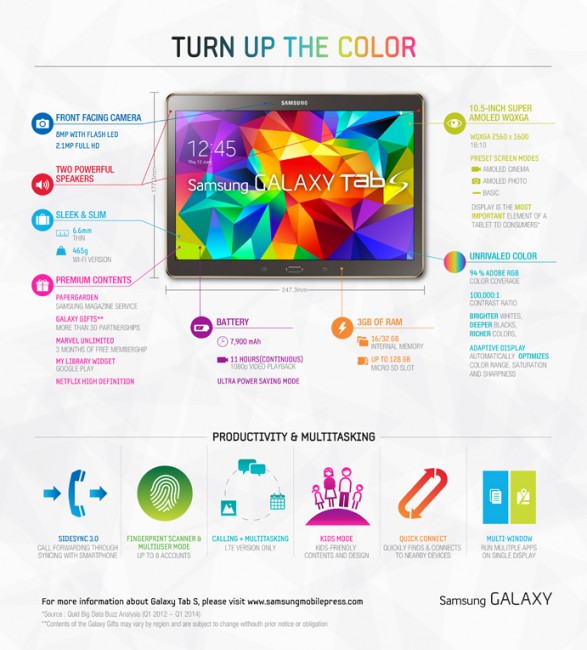