Toshiba unveiled three new low cost tablets on May 27, two of which are Windows 8 tablets, while a third is this, the Toshiba Excite Go, their newest 7-inch budget tablet with Android 4.4 KitKat for only $109:
http://www.amazon.com/Toshiba-Excite-AT7-C8

It’s a low price alright, and unfortunately it’s still something of a rule in the world of tablets that a low price usually equals low specs. So the 7-inch screen have low resolution of 1024 x 600, and a battery that lasts for 6 to 7 1/2 hours max, which is low obviously and maybe something of a dealbreaker for people who would otherwise have an interest in this tablet. 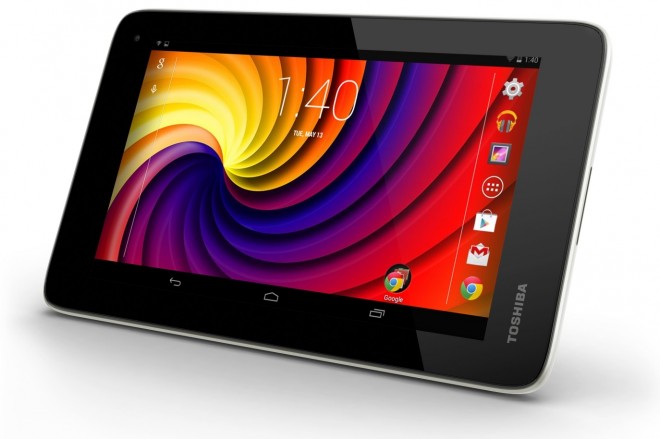 The processor actually isn’t all that bad with a 1.33GHz quad-core Intel Atom Z3735F processor. Toshiba Excite Go is also equipped with 1GB of RAM, and for $109 has 8GB of memory.

An alternative to this tablet was launched by Asus recently, with the Asus MeMO Pad 7. But I can’t really recommend either of them, and would advice everyone to go up at least on tiny price level to avoid disappointment and a user experience that is hampered by too low hardware specs.