A tablet that’s supposedly from Samsung was benchmarked at GFXbench 2 days ago, and at first it didn’t make sense to me, so we didn’t report on it.

But eventually even Sammobile took to writing about it. This model, with the model name Samsung SM-T561 appears to be the lowest entry budget tablet from Samsung this year, if we are to rely on these specs. It’s listed with a 9.6-inch screen, but that could also mean a 9.7-inch screen, like so many other Samsung tablets this year. But with a resolution of 1280 x 800, not a 4:3 aspect ratio.

The Android 4.4.4 it’s benchmarked with, along with the lack of camera support both front and rear in one part of the list, but with a rear camera confirmed in another part of the list, might indicate that this tablet is in the early stages of development.

The processor is listed as a 1.3 GHz Spreadtrum SC8830 processor. This is a processor Samsung have used on the Samsung Galaxy Grand Neo

The RAM is at 1.5GB though, so not all the specs are entry-level.

We’ll have to keep an eye out for this tablet, though Wednesday was the first time it was heard of, so it might take some time to figure out what Samsung is up to here, since Samsung have yet to announce any new tablets in 2015.

Some unofficial Samsung tablets have already passed through the FCC though, like the 9.7-inch Samsung (SM-T555), so it’s clear that a launch of some new Samsung tablets is drawing near. 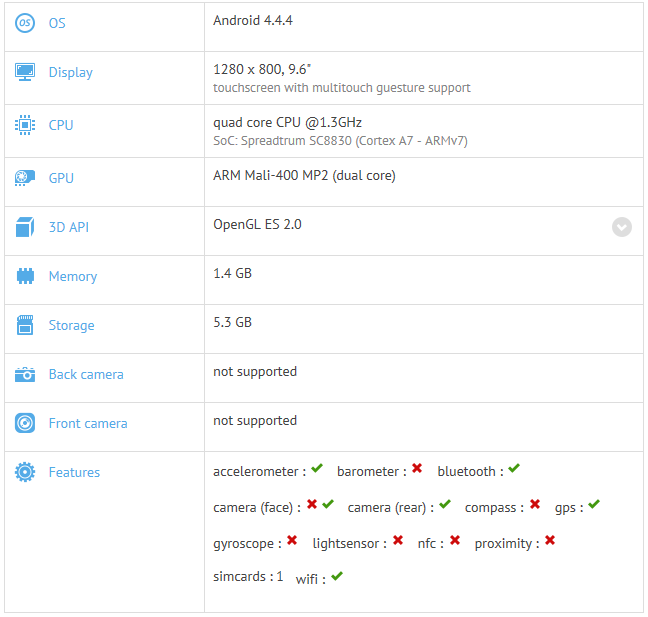