The 9.6-inch Samsung tablet that have been leaking for months finally have a name, and it’s Samsung Galaxy Tab E it was found out today after the tablet made a surprise appearance in Taiwan Mobile’s June catalogue.

The catalogue listing leaks the first image of it too, even if it’s a very low resolution image. The rest of the listing doesn’t reveal much more than the specs that leaked through a benchmark test in March. 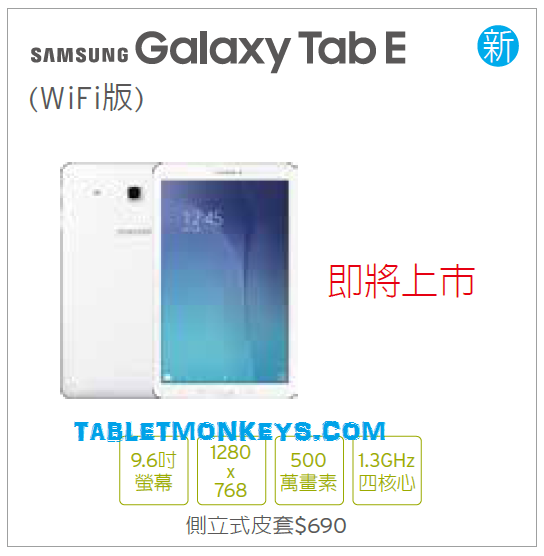 The SM-T560 is the Wi-Fi only model, while the SM-T561 is the cellular 3G/4G LTE model. Other sensors shared are accelerometer, Bluetooth 4.0, and GPS. The 9.6-inch dimensions is real and was confirmed by FCC documents in May, along with sketches that outline the design of the exterior. It was also Bluetooth certified on April 29.

The Galaxy Tab E name conflicts with a different pre-existing 7-inch model that carries the same name in South-America, so this 9.6-inch model might get different names in different regions.