Voyo is a mobile computer company that have utilized powerful processors for years, and by the looks of it they are about to launch a real Surface Pro competitor soon with equal power, just at a lower price for the 12.6-inch Windows 10 tablet called Voyo i7 Plus, which I think is estimated to launch in the $800-900 region.

The name is hardly distinguishable from some of the other products in Voyo’s portfolio, but this really is a new tablet. It is in the Surface Pro category, with near equal design, apart from hinges on the kickstand that seem like an imitation of Lenovo’s watchband hinge design instead.

Specs of the Voyo i7 Plus are a 7th gen. Intel Core i7-7500U processor, with Nvidia GeForce MX150 GPU, 8GB DDR3L RAM that is supposed to be upgradable to 16GB, and 256GB of SSD storage. I don’t know if the tablet can be easily opened, but it is supposed to support upgrading of the RAM. 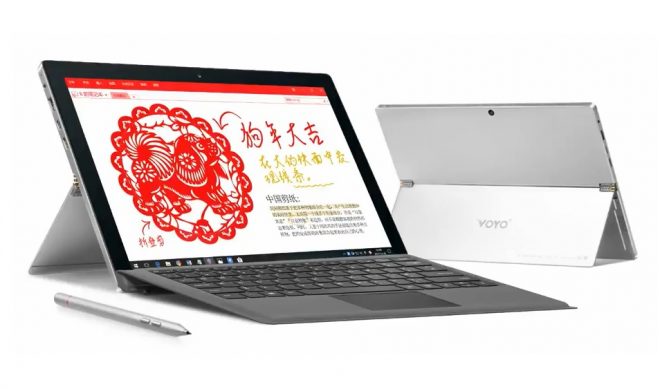 A few new devices will be announced by Voyo in January, but I don’t yet know when the Voyo i7 Plus will become available.