This new Windows 10 Pro 2-in-1 tablet has been redesigned with over 800 new customs parts for the hardware and exterior. The Windows OS version is Windows 10 Pro with Creators Update installed. 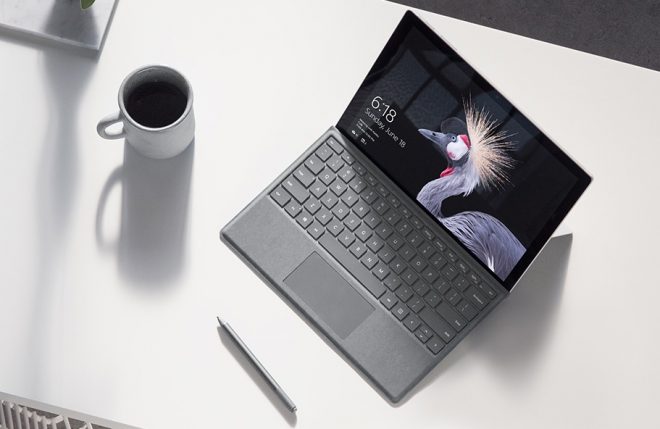 The most powerful Surface Pro is 1.7 times faster then an iPad Pro according to Panos Panay. And the Intel Core i5 model, is the world’s first fanless Intel Core i5 tablet. but Microsoft underlines that with a noise output of just 18 decibels from the i7 version, people won’t be able to hear the fan. That’s 2 decibels less than whisper.

The 12.3-inch screen (PixelSense) has a display resolution of 2736 x 1824 which gives it a ppi of 267 and 3:2 aspect ratio, and Microsoft says that they developed their own custom silicon named the PixelSense Accelerator to enhance the colors with even more precise, vibrant, and dynamic colors than before, and also that it has a color switcher so an owner can go from SRGB to enhanced colors by a quick switch.

So the display of the new Surface Pro is now even better than before, and we should take into consideration that display on the predecessor Surface Pro 4 had already been rated as the best LCD tablet display in the world by independent display testers DisplayMate.

It has a full-size USB 3.0 port on the side, which is compatible with USB Type-C says Panay. But another way to use it, is to get the Surface Dock that adds 4 USB ports and the ability to run two additional monitors even in 4K. Other ports includes a 3.5 mm audio jack, cover port, mini display port, Surface Connect. 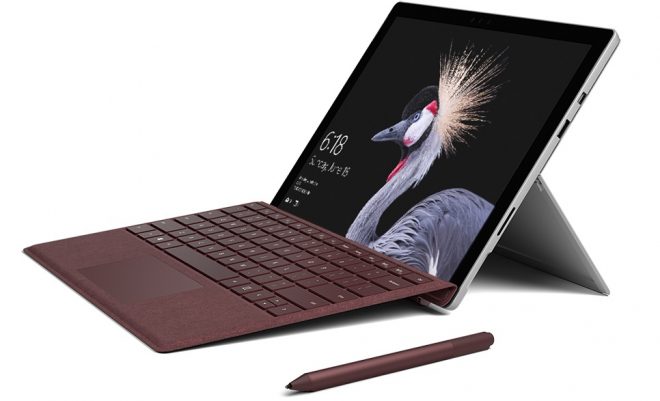 A Surface Pro LTE version will be launched later in 2017 says Microsoft too, around fall this year called new Surface Pro LTE Advanced. Wi-Fi is complete on the Wi-Fi edition though with dual-band and dual-antenna cover for the 802.11 a/b/g/n/ac Wi-Fi.

The new Surface Pro also has a new hinge for the built-in kickstand with a 165-degree range of stand positions, that can even put it into “Surface Studio mode” so that users can lean over the tablet when writing on it with the pen.

And the new Surface Pro also has a new Surface Pen, which is a tilt sensitive digitizer with 4096 levels of pressure sensitivity. This new Surface Pen will be launched in early June in the colors black, platinum, burgundy, and cobalt blue. A new app has been developed to introducee some new pen features too with a new app called Microsoft Whiteboard on Surface which enables live multi-device pen use, across devices between anyone you invite to a project. So two or more people can draw on the same sheet, where ever they are in the world.

It will also add features pretty similar to those in the Nebo MyScript app, where you can draw figures by hand and let the app tidy it up for you, or convert handwritten notes and tidy up them too. This Microsoft Whiteboard app will be launched later this year, with an additional version for features only available to Office 365 subscribers. 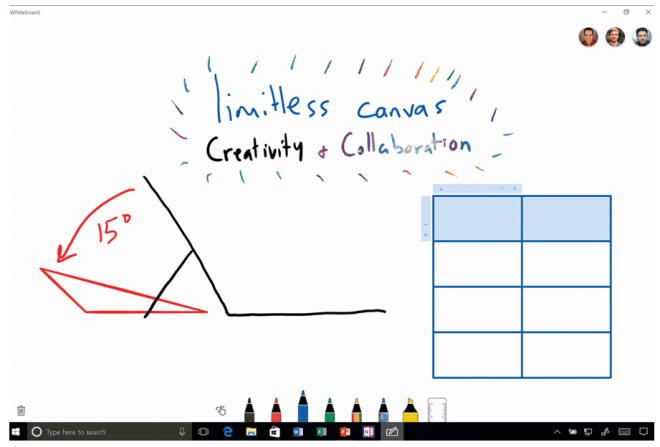 Microsoft Whiteboard App – In this example, the 3 users on the top right corner are joined in on the same sheet. The hand drawn red triangle have just been corrected by the app, just like the 8 cell table in blue

And the Surface Dial is supported too naturally, so it will work both placed on top of the screen, or placed near the tablet.

Microsoft have also developed color matching keyboards to match the colors of the new mouse and new pen. These Surface Pro keyboards are the new Signature Type Cover keyboards, Alcantara covered keyboards with backlit keys. So the new keyboards adds the color options of platinum, burgundy, and cobalt blue.

The new Surface Pro has an amazing 13.5 hour battery life, which is best in class battery life among the powerful Windows 10 tablets. And this is measured by the video playback standard that tablets are measured by too. Microsoft even says that this was the average based on the Intel Core i5, 8GB RAM model used in the testing, so that’s outstanding.

It has a IR front camera so owners can log in quickly ad securely to the tablet and data with facial recognition. Another security feature is a TPM chip. As for normal cameras it features a 5MP front camera and 8MP rear camera, with new enhanced stereo speakers with Dolby Audio Premium. Additional sensors includes ambient light sensor, accelerometer, and a gyro. 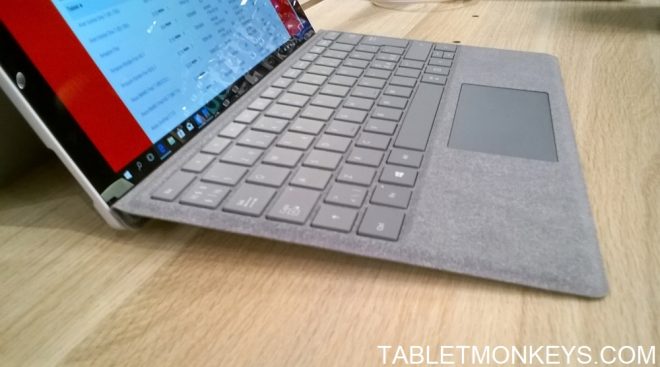 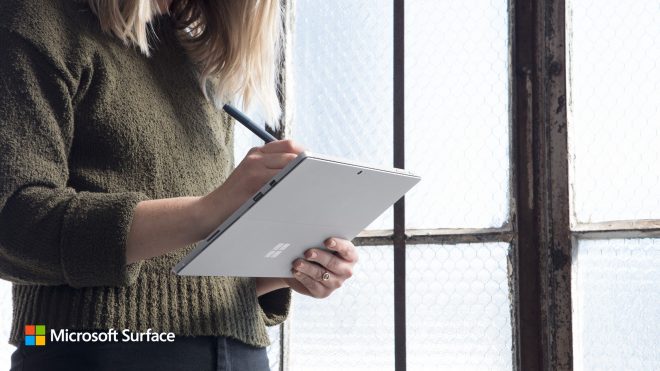 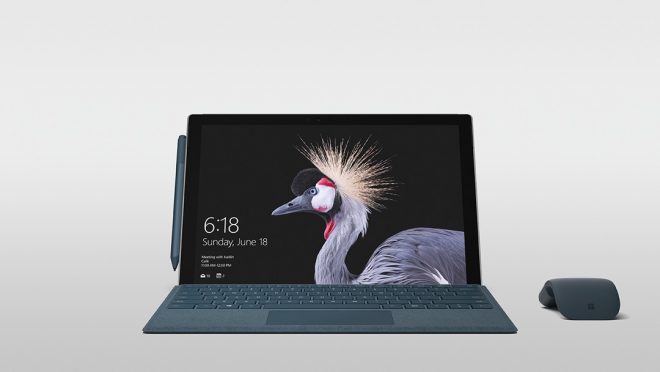 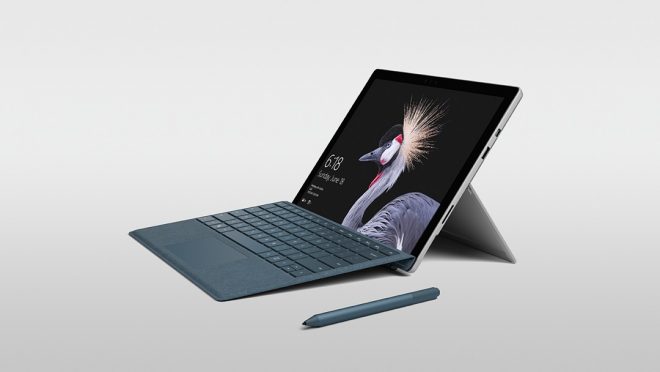 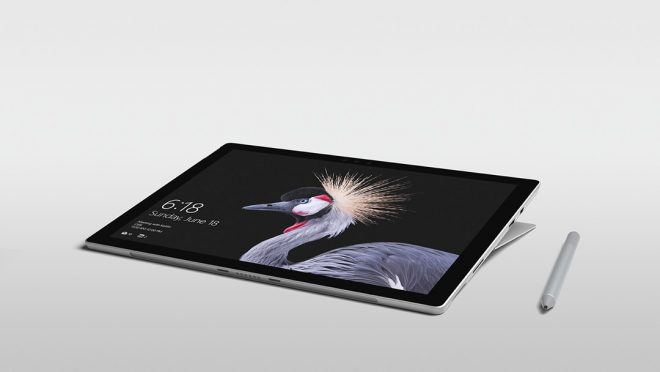 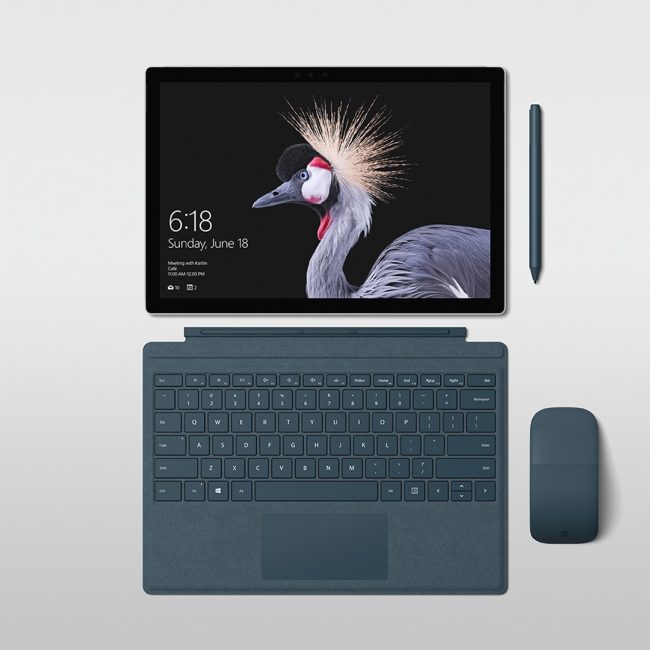 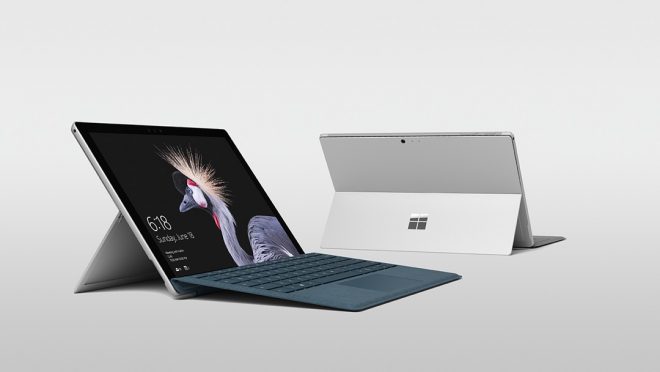