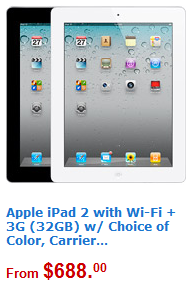 gives a $25 eGift Card to those who purchase a NOOK ereader/tablet device using a MasterCard on Cyber Monday.

Verizon Wireless offers the Motorola Xoom tablet for $199, but only with their own bundle. For their “Cyber Week Online Specials”, Walmart sells the 32GB iPad 2 with Wi-Fi + 3G for $688 on Cyber Monday. The non-discounted price at Apple is $729, so Cyber Monday bargain hunters may save a mere $41 on this deal.

Best Buy had the 8GB Acer Iconia going for $229.99, but was sold out early in the morning. More and better tablet discounts are expected to come.

haven’t even released all their announced “Cyber Monday Deals Week” goods yet, and it looks like they will continue to add computer deals all week, and we hope to see tablet deals throughout the week that are as good as they were on Black Friday. The bad news is that you may have to hold your breath a little for tablet deals. The good news is that according to the statistics, 51,7% will be doing so from work.

Update – Friday and Saturday: For the lack of really large discounts on tablets, at least some (possibly) good news came on Friday when Amazon announced yet another shopping themed week. After Black Friday Week, and Cyber Monday Week, starting Sunday 4th of December, Amazon is launching “Holiday Flurry Deals Week” that will last for a week. It is categorized by a specific shopping segment each day, and Friday Dec. 9th is Electronics Day! Our guess is that this will be the last sales event before Christmas where people are given an opportunity to make a good deal.

Update for Tuesday, Wednesday, and Thursday: Still no news regarding tablet discounts for “Cyber Week”. But some deals are still available, such as a $100 discount/credit on Amazon’s popular new tablet Kindle Fire

when you join Audible’s Audible Listener Gold plan for 12 months.

That’s $100 off a $199 tablet! This is a pretty good deal, considering that if you were going to buy the Kindle Fire anyway you were most likely also going to connect it with Amazon’s wast media offers of movies, TV-series, games, magazines, e-books, music, and audio books too. This deal is also available with another Android tablet, the 32GB Motorola Xoom

Watch this space! We will update continuously throughout the week.