Back in March we found a tablet from Samsung with the model name Samsung SM-T561 that had just been benchmarked with a 9.6-inch display. Since benchmark listings are often deliberately skewed in order to camouflaged unofficial devices, we didn’t know what to make of it at first.

But I know what to make of it now, since I discovered today that the same Samsung SM-T561 tablet have been confirmed by new FCC documents that officially confirms the size of the display.

Reading through the documents that were submitted to the FCC on behalf of Samsung, it says that the Samsung SM-T561 has a tablet display that measures 243.5 mm diagonally, so converted to inches that number becomes 9,5866 inches, which then might be rounded off to 9.6 inches in commercial presentations.

All the other measurements of the device stacks up the same way when compared to the just slightly larger 9.7 Samsung Galaxy Tab A. SM-T561 is 242 mm long and 150 mm wide, so just barely smaller than the 9.7-inch Tab A.

Other details include the confirmation of GSM 850 and GSM 1900 support, so this is a cellular tablet. We also found a very detailed sketch of the tablet so we know what the basics will look like.

From the previous benchmarks and Bluetooth certification leaks, it has been spotted with 1280 x 800 resolution, Android, 1.5GB of RAM, and a 1.3 GHz quad-core processor. For more specs see our first Samsung SM-T561 article.

Samsung have announced and launched four tablets this year, which are the 8-inch and 9.7-inch Samsung Galaxy Tab A tablets with and without digitizer pen. The next Samsung tablets expected to be launched soon are the high-end 2nd generation Samsung Galaxy Tab S2 tablets, coming up in June. 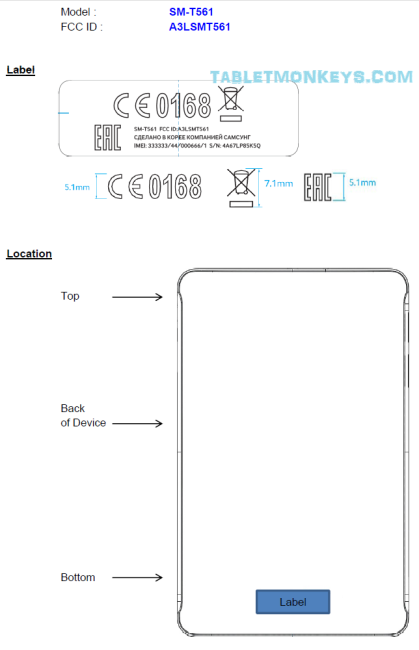