The Samsung Galaxy Tab 3 line with three tablets was launched in July 2013, all carrying specs that left a lot to be desired. They are solid tablets, but not cutting edge exciting.

The Samsung Galaxy Tab 4 7.0 promises to be a little better, but if the specification rumors hold water, then Samsung seems quite firm on marketing the Galaxy tab line as the middle range line of tablets, where you pay more for the premium brand of a Samsung tablet, and for the features, apps, and services that Samsung tends to bundle in with their tablets, more than you pay for the hardware. Thus the Galaxy Tab 4 line will continue to be a safe buy, where people will have the option of buying into the Galaxy TabPRO line if they want higher specs. 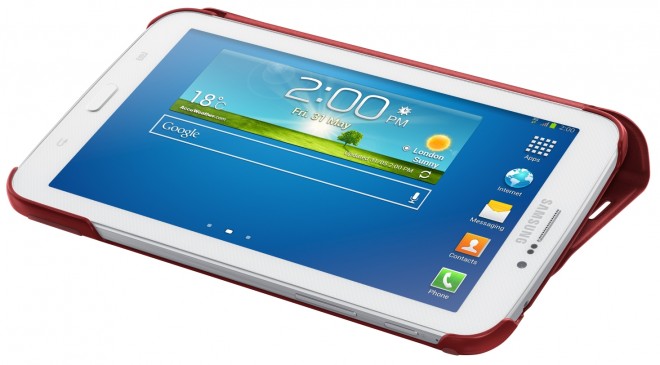 What the present Samsung Galaxy Tab 7.0 looks like. Design expected to remain similar on Galaxy Tab 4.

As for the actual specs of the Samsung Galaxy Tab 4 7.0, these begins with the option of Wi-Fi only, 3G, or LTE models. Next up is the latest Android 4.4 Kitkat, a 1280 x 800 resolution, 1GB of RAM, and most importantly, a 1.2GHz quad-core Qualcomm Snapdragon 400 processor.

The lowest storage option will continue to be 8GB with support up to 64GB microSD cards externally. The battery capacity is 4450mAh which is pretty decent for a 7-inch tablet, and a 1.2MP front camera coupled with a 3MP rear camera. The weight is 320 gram.

Features will depend on the region and bundle it is sold with, but the main US version seems to contain Samsung Hub Service, E-Meeting, WebEX, and Remote PC, to name a few.

Release is currently expected around June – July sometime, with the launch price probably being $199.