4 / 5
PCmag is in praise of the Galaxy Note’s multitasking abilities and features, its very good display quality, the usefulness of the pressure sensitive S-Pen stylus, and even the IR-emitter. But experienced performance hiccups and finds it expensive.

4 / 5
Laptopmag thinks the display looks better than the current iPad’s display, thinks it’s a better multitasking tablet than other Android tablets or the iPad, sees a lot of productivity potential in the S-Pen and its features – but as cons lists a battery life that seems to be a little poor (compared to iPad 4), experience lag on simple tasks like rotating the tablet, and like everyone else thinks it has a high price.

3.75 / 5
Phandroid likes the screen, solidity of the tablet, the overall design, multitasking and multimedia abilities, and the class leading S-Pen in their review, but on the other hand lists performance lag, and the relatively high price as drawbacks.

3.5 / 5
Digitaltrends names the multi-tasking features as stand out features, likes the high-resolution display, is in praise of the high hardware specs, and sees it as having better aesthetics than its predecessor. But on the negative side points out that it’s more expensive than the iPad 4, that it has performance glitches despite the high-end hardware specs, and that the sheer number of features can be overwhelming and confusing.

3.2 / 5 (6.4/10)
The Verge likes the the handwriting recognition and the quality and resolution of the display, but lists uneven hardware performance, high price, and few S-Pen features as cons. 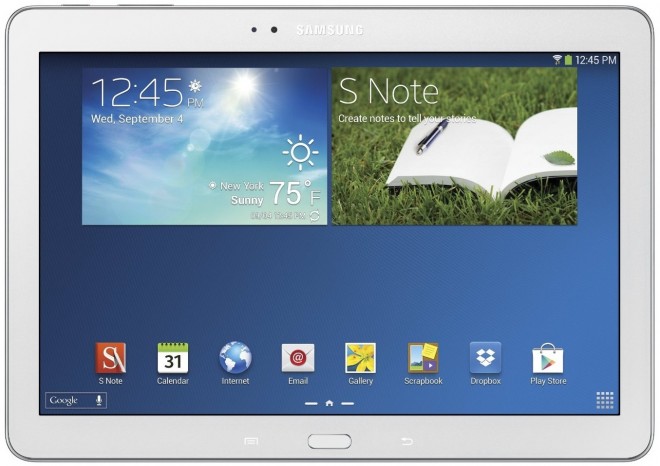