One of Lenovo’s next 7-inch Android tablets for the 2018 – 2019 model year have leaked, and this tablet appears to be very much a budget tablet.

Carrying the model number Lenovo TB-7104F, and certified as a new Lenovo Tab 7 tablet by the Bluetooth certification body, it is in line to succeed the Lenovo Tab 7 Essential. That tablet was launched in November last year together with a version with a little higher specs.

Because the specs on the “Lenovo Tab 7 5” are low, and the predecessor actually shares a lot of components with Amazon’s Fire 7 as we have mentioned earlier. But even the successor seems to run with mostly the same specs, such as a quad-core 1.3 GHz MediaTek MT8167D processor, with options of 1GB of RAM and 8GB or 16GB of storage. Interestingly though, the RAM on the predecessor is actually DDR4 RAM, so that’s something at least.

According to the Bluetooth files, it has downgraded the cameras to a 0.3MP front camera and a 2M rear camera, with a tablet thickness of 10.25mm, which is definitely on the thick side in 2018. The Bluetooth files also says that this tablet is a Android 7.0 tablet, but Benchmark tests have caught it running Android 8.1, and even last year’s model was launched with Android 7.0.

The predecessor was launched for $79, and with a low price like that it’s hardly ever on sale either. There is still a components shortage in the supply chain for computer hardware, and the prices of hardware internals have generally been going up, so it will be a little interesting to see if Lenovo will continue to price the successor at $79 too, as it seems that only Amazon is in the position to sell their tablets cheaper. 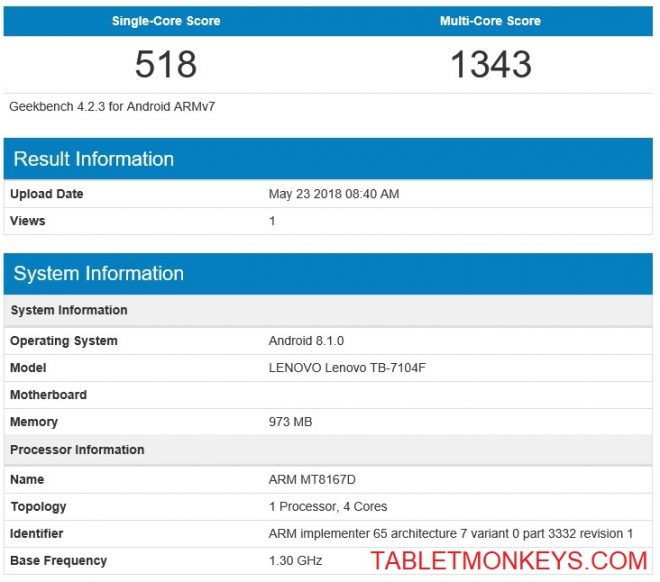