What looks like an altogether new Android 10 tablet from Samsung was purportedly benchmarked on Geekbench 5 as noticed by Nashvillechatterclass.

I could only find the benchmark for one version of this tablet, and that was the Samsung SM-T575 model, which so far indicates that if the benchmark is true, there is a tiny chance that it may only comes as a 4G LTE version. As has been the case with the Samsung Galaxy Tab A 8.4.

Specs revealed by the benchmark, reveals Android 10, and the octa-core 1.79 GHz Samsung Exynos 9 9810 processor with 4GB of RAM.

This is the same processer that’s been used in a few Samsung smartphones, such as some editions of the Samsung Galaxy S9+. 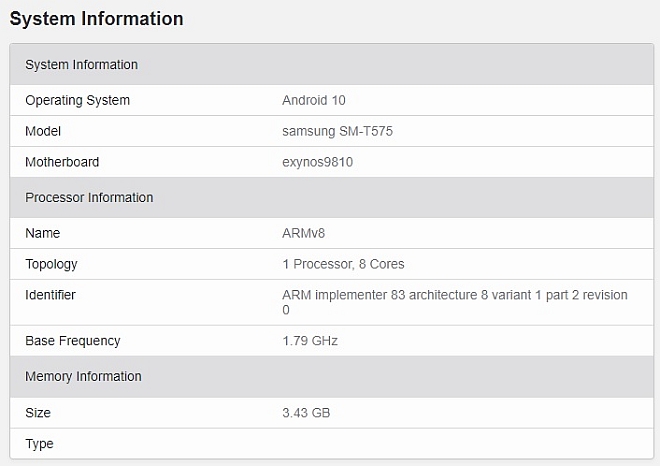 So just for comparison, with that chipset configuration in the S9+, it clocks in Geekbench 4 benchmark scores of around 3750 in single-core, and 9220 in multi-core scores.

Judging by the model number, this tablet should structurally belong to the 9.6-inch to 10.1-inch range of Samsung’s Android tablets.

But it’s still too early to tell if this tablet will succeed either of those two tablets.

The original article also mentioned that he had found traces of a 5,000 mAh battery belonging to Samsung SM-T575, which tells me that this Samsung tablet might be an 8-inch tablet instead, since that’s the typical battery capacity Samsung equips their 8-inch tablets with these days.