At CES 2017 in January, a French startup called Miraxess unveiled the Mirabook, which is the same type of “mirroring” 2-in-1 device withouth any computing hardware on the inside like the Superbook or the HP Elite x3 Lap Dock, that gets its computing power from the smartphone. And over the course of the last 24 hours, Miraxess have started the Indiegogo funding campaign for it.

But unlike the HP Elite x3 Lap Dock, the price of the Mirabook is just $180 for the first backers, before it rises to an estimated MSRP of $299 later. The main problem is the expected Mirabook launch date, which is currently December 2017. And with Miraxess being a startup, we could be looking at 2018 before it’s actually available. But we will cross our fingers and wish them the best of luck in the meantime. 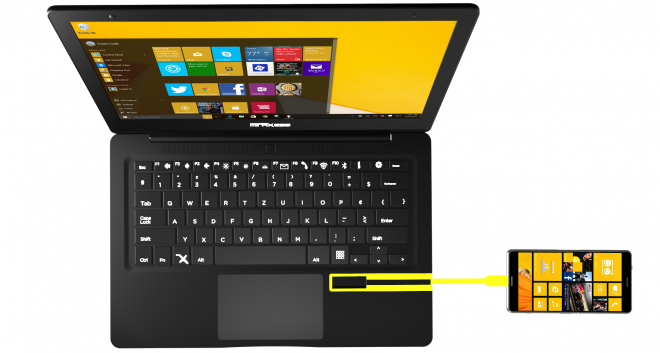 The 13.3-inch Mirabook has a highly visible and colorful USB Type C cable integrated on top, which is what plugs into the smartphone that a user would want to mirror, or instead of mirroring actually use with PC sticks and Raspberry Pi. In that sense, the Mirabook can be thougth of as a modular laptop, where you can keep the 13.3-inch Mirabook for years and just change the PC sticks whenever you need to, and even swap between operating systems according to your need. So the Mirabook is not a bad idea.

The first limitation is that it hasn’t been developed to be compatible with an Apple iPhone, so Windows and Android smartphones will be the first smartphones that can be used with the Mirabook. Now that Samsung have been given a fair bit of attention over the DeX desktop interface with the Samsung Galaxy S8, the timing for this sort of mirroring device is good.

Another concern is that despite lacking any real computer hardware on the inside, it still weighs 1000 grams, which is 270 grams more than a 13.5-inch Surface Book.