The Microsoft Surface Pro 3 Docking Station have begun taking orders, and it will be released on August 15 in the US and Canada:
http://www.microsoftstore.com/store/msusa/en_US/pdp/Surface-Pro-3-Docking

From the front the Surface Pro 3 Docking Station might look like a typical sturdy tablet docking station from Microsoft like the ones we have seen manufactured for the first and second generation Surface tablets, but when we turn the docking station around and have a look at the rear, things get really interesting.

Suddenly we have a plethora of different ports, with more ports than you’ll find on most laptops, because the Surface 3 Docking Station has 3 x USB 3.0 ports, 2 x USB 2.0 ports, a Gigabit Ethernet port, a 3.5mm audio input/output jack, Mini DisplayPort video output with support up to 3840 x 2600, a power supply input, and a security lock slot.

And the USB 3.0 port that is on the Surface Pro 3 tablet itself is still physically available when the tablet is in the docking, so that gives you 4 x USB 3.0 ports in total.

So now you can hook up both a mouse, printer, speaker system, additional keyboard, and two additional monitors if you will, all at the same time. It’s also possible to connect monitors with HDMI, VGA, or DVI inputs to the docking via adapters. 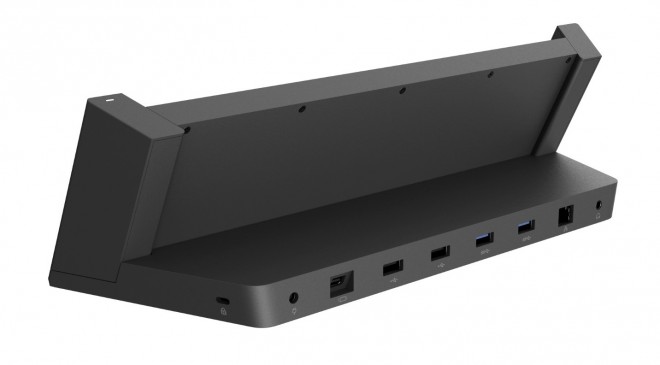 The Surface Pro 3 Docking Station is being released just two weeks after the August 1 release of the Intel i3 and Intel i7 models of Surface Pro 3. The Intel i5 models with 128GB and 256GB storage were released on June 20.