Following the hugely popular tablet sale yesterday of the Dell Venue 8 Pro where the price was cut from $299 to $99, Microsoft Store’s are following up with yet another tablet doorbuster on Saturday, December 14th, in both the US

This time it’s the new Microsoft Surface 2. Yes, gone is the old Surface that just saw such a formidable sale too during the Black Friday sale period. And while we can’t announce the price before Saturday, it’s enough of a price cut to make it worth a second look if you already fancied the Surface 2. 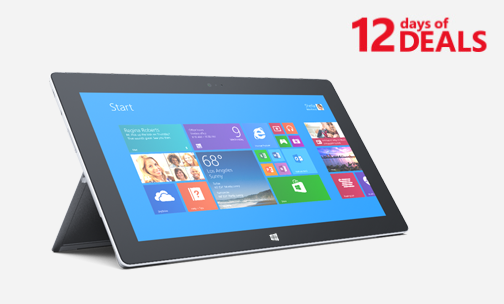 The sale is a part of Microsoft Store’s 12 Days of Deals that applies to both offline and online stores. Every day sees a new popular product on sale, starting at exactly 7:00 AM (PST). All items are in limited supply, so this Christmas – if you snooze you lose.

Before the sale on Surface 2 on Saturday, is the 41 Megapixel Windows phone Nokia Lumia 1020 up for grabs on Wednesday, and on Friday 13th, the computer game Grand Theft Auto will be on sale as well.