LG seems to have hired some comics in their PR department as they today officially announced the global launch of the LG G Pad 10.1-inch Android tablet. However, it’s actually the 7-inch version that have found it’s way to stores, though LG haven’t actually announced the rollout of that one yet.

The LG G Pad 7 popped up on Newegg and Bestbuy over the weekend, and sells for $149.

As for the 10.1-inch LG G Pad, LG stated today that the LG G Pad 10.1 will make its debut in the United States followed by other markets in Europe, Asia and Latin America later in the month. Prices and retail availability will be announced locally in each market.

In addition to that, LG released a neat promo poster for the LG G Pad that outlines its particular features, such as the Samsung-like dual-window multitasking feature.

The main competitor for LG G Pad 10.1, is the Samsung Galaxy Tab 4 10.1, which was launched in April and have practically identical specs, but just a couple more features. 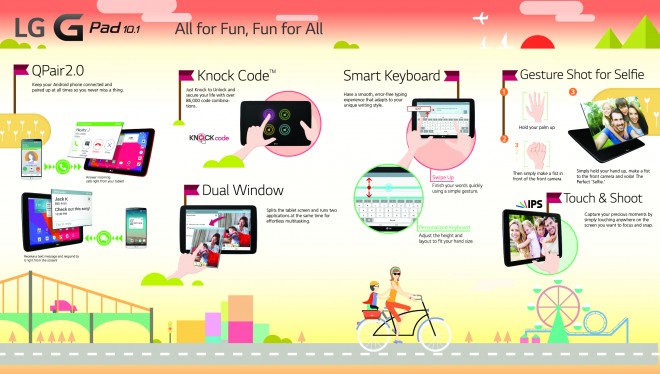